I have been hit by the Mummy Guilt Bus over many things since BB was created. Ranging from the fact I ate prawn sandwiches like they were going out of style during my pregnancy (at that point it was vaguely questionable as to whether it was ‘safe’ to eat them) to the other day where I favoured eating my dinner over the fact that he was yelling in demand for one of us to come and stroke his hair so he could fall asleep – because it was 8.30 and I am a pregnant blimp who gets dizzy and nauseous if I get too hungry.

Disclaimer:  Cooked prawns are (according to my midwife now, in my second pregnancy) in fact fine during pregnancy – swordfish and shark however are not… darn it! And I bolted my food that night like a competitor from Man vs Food before compromising and sitting across the room from BB’s cot for 15 minutes, soothing and reassuring him all was ok and that it was time to go to sleep.

On average, I get struck by the Mummy Guilt Bus at least 10 times a day. It’s preceded by the Self Doubt Fairy on my shoulder, who nervously twitches about, twiddling her thumbs and tugging on my earlobe, whispering things into my ear. Things such as ‘Don’t you think you should play with him rather than answer this email? … He’s been playing by himself on the floor for 5 minutes… don’t you think you should get down there and ‘interact’ more?’ or ‘A Heinz Ready meal for dinner AGAIN??  What happened to feeding him all home cooked meals with a range of colours, flavours and textures?’ or my personal favourite of ‘Should you be working right now? He’s not going to be little for long… you should be soaking it all up! Every second. RIGHT NOW!’.

We are so self critical and critical of others too. It is exhausting. And we are surrounded by statements and opinions that just fuel the fire. Only the other day, this post circulated around social media… another shame, another wagging finger. 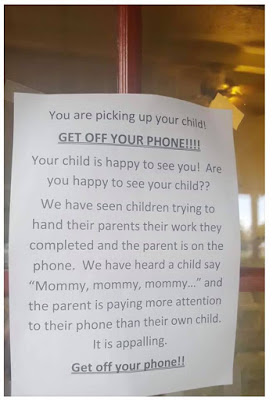 I completely admit that I could not bear to be the parent who favours checking their Instagram instead of saying “hello” to their child after a day at nursery. When I pick BB up after any time apart, my phone is in my pocket or bag and away from my mind. I also admit that I would find it hard to witness a parent doing such a thing without feeling sad. But, that’s just my own personal opinion and, really? It is none of my business. It wouldn’t be my place to voice how I felt.

On another perspective… who’s to say that the parent on the phone isn’t receiving important information about something urgent? Maybe a possible emergency or some bad news? Could they be desperately trying to balance their career between their home life (what a tough balance that is?!) and struggling to know what and who to prioritise first? It is so easy to say ‘Your child should be priority’, but if you have a boss (you know.. the guy who pays your wages and keeps the roof over yours and your baby’s head… that guy) who is on you about a deadline or a client who is your bread and butter because you are self employed and need to secure their custom to make your ends meet – if they decide to contact you at the exact moment your little one runs up to you with a finger painting… it makes for one hell of a tough call. Literally. Ha!

When did it become acceptable to put these notices up anyway? Because, if we are continuing in the same vain… I would expect to see where all the other notices are. Where is the ‘Don’t raise your voice to your child, it’s appalling’ notice and the ‘Don’t bribe your child with chocolate, it’s appalling’ notice? In fact… the entire wall capacity of every daycare/nursery/pre school/kindergarten could just be a mass wall paper of parental guilt and shame based on generalised opinion and circumstance.

If a child minder is concerned about a child’s welfare and feels they are being neglected in any way, surely it is better that they deal with the parent/child in question, face to face? Privately?

Generalised notices like these leave us all victim to the ‘Self Doubt Fairy’… and we instantly run the risk of holding a self analysis before feeling guilty and then defensive for even checking a text or email in the company of our tots… at any time.

And, believe me, as a regular RTC victim of the Mummy Guilt Bus, I don’t need the side order of guilt and shame. I already filled up on the free self doubt and loathing buffet that Self Doubt Fairy has been shovelling down my neck since conception anyway.

Enough already. Motherhood is exhausting enough without all the tellings off, questioning and constantly being made to feel bad or inadequate. It took a lot for me to admit that motherhood isn’t all I want or enjoy from life. There. I said it. The Self Doubt Fairy went a shade of puce with that one. It doesn’t mean its not what I want to do with my life or that I don’t love my son to phenomenal levels or that he is not my top priority; or even that he (and currently growing bump) aren’t the biggest and most important parts of my life. It just means that there are other parts present, and that I am not going to feel guilty for having other focuses and interests going on. Nor am I going to be some cross between Mary Poppins and the smug Mum from Topsy and Tim on Cbeebies every day either. It’s too exhausting to even comprehend?!

Halting the Mummy Guilt Bus isn’t me being self righteous. At the same time, I also don’t believe that it makes me selfish or a bad mother. I see it as being more of a self preservation tactic, the practise of not willingly giving myself a hard time over things constantly (well… if I can help it) and I try to make sure I am OK so that I can be there for my babies without crumbling to dust every five minutes from the weight of being this perfect, selfless, Super mum who never sets a foot wrong. I came across a quote the other day that said ‘You can’t pour from an empty cup – put yourself first’ and it really resonated with me. I’m not saying I leave BB chained in the corner with bread and water before going out to get my hair and nails done. And, like I said, I would never greet him from nursery by checking twitter.

I’m just saying that I am a bit sick of the constant critics, and occasionally flick the Self Doubt Fairy off of my shoulder, step out of the path of the oncoming Mummy Guilt Bus (which is, by the way, driven by the types of people who put up notices in nurseries), and I focus on my own task in hand rather than downing tools at the drop of a hat all the time, for fear of not being ‘perfect’ and ‘super’.

In fact… I am in the process of hiring a new fairy. Her name shall be ‘Pat on the Back’, and she shall kick ‘Self Doubt Fairy’s arse and decommission the Mummy Guilt Bus in the same way those nuns decommissioned the Nazi’s car during that final scene of the Sound of Music. She shall help me believe in myself as a mother, to climb every mountain (ok… shall stop the SOM references now), be kind to myself and others as a human being and pat me on the back for all the good things I am doing. Because, personally, from one look at my kid, she can’t be wrong and they simply must outweigh all the bad. 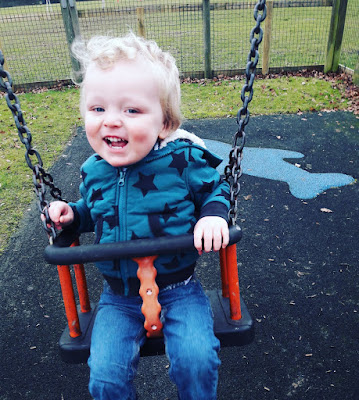