I was SO naive about pregnancy before I started a family. There I was, thinking that once I became ‘with child’, I would blossom and bloom, so amazingly and breath taking to behold that the world would slow down it’s turning to catch a glimpse of me and my gorgeous bump and I would be treated like a small delicate flower.
I was looking forward to losing my temper with people for treating me as if I were fragile. I had visions of having cigarette smoke from across the street wafted out of my vicinity, in case I breathed in the fumes and harmed the precious babe in my belly. I envisaged people holding doors open for me… endless back rubs and foot rubs. I honestly practised lines in my head in preparation for situations, thinking my favourite of ‘Tuh… I’m pregnant, not dying… don’t worry about me!’ would come into perfect use (along with an eye roll and a bat of the hand), possibly when I was trying to make the bed, open a door or pull out a chair to sit on.
I haven’t used the line once. In a nutshell, people get used to you being pregnant. After the initial ‘Wow!’ factor, the fact that the baby is inside you and can only really be felt by you… kind of excludes everyone else from the club really doesn’t it? People are busy, people are tired. You are not the pivotal axis of the planet after all.
Especially second time round. The novelty has completely worn off by then and your first basket of fruit from your loins has everyone distracted from the fact you are working on another. Lifting I’ve been spared a lot and I’ve been grateful to have that help, especially when it comes to having BB or shopping bags carried. But, on the whole, special treatment has been non existent. Back massages and foot rubs were also a perk in my head. Small price for creating an entire human from scratch. I’ve actually given more foot rubs  than received this second time round!
I also had this image (more so the first time round) of my appearance staying as myself, just with a bump attached. I pictured fuller boobs, a nice round bump, glowing skin and shiny hair.
What. A. Prat.
Cue dough like limbs, a massive globe in the front and two admittedly full boobs that will in time deflate and hit the dirt. Literally. I underestimated the back ache (our spines curve like a pretzel?!) and the puff of fluid retention. I had no idea your pelvis could become misaligned and make walking up the stairs or turning over in bed torture. I just looked forward to the magic of feeling a baby kicking inside me. Luckily, that magic is valid… and makes up for the pain!
Now, don’t misunderstand me, I am not ungrateful, neither am I put out by reality. I am an independent woman who is also stubborn, hot of temper and very determined in nature… and that’s without a shit load of hormones on top. I don’t wish to be molly coddled and I don’t want to be constantly treated like a princess either. Its simply that I had expected all of that stuff. I thought I would have to be cajoled into sitting down and forced into submission with a neck rub. I envisaged getting annoyed with people for treating me so carefully and for wanting to touch my beautiful bump. That I would feel suffocated. And … its not the case at all. The world continues to spin at the same speed as ever. My groans and moans of aches and pains are met with a pat on the shoulder, I actually grab people’s hands to try and share the magic of a kick and a toddler who wants his toy, that he’s lost under the sofa, really doesn’t get or give a shit that their sibling is curled around my bladder and head butting my cervix.
Just as well really, it is all preparation for what is to come and stops me from getting too comfy. After all, a newborn baby doesn’t exactly bestow the princess treatment in abundance either do they? Ha! 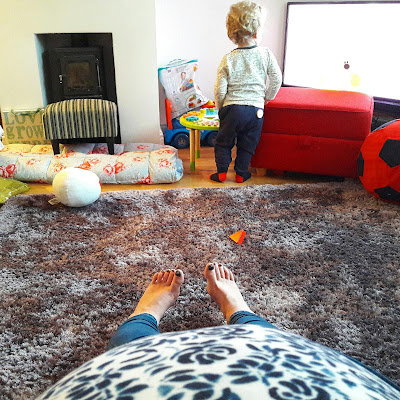