Before I started Being Mummy, I was an unofficial mummy already… to two feline fur babies called Winnie and Fred. Since real baby BB came along over a year and a half ago, these two little people in the house have unintentionally had to take a bit of a back seat due to there not being enough hours/laps/hands free for a cuddle or scratch behind the ear. But, my love for them is unchanged… despite the fact they sometimes seem to meow loudly on purpose during nap times and have been caught sleeping in the bottom of the buggy on several occasions!

When the opportunity came up to try a Purrfect Animal Box from Pawsome, I didn’t think twice. After all, I shamelessly treat myself to a beauty box every month, therefore the idea of my feline friends receiving a similar deal really appealed. It is a really clever notion working with the same concept as beauty boxes, where by you subscribe monthly to Pawsome, give them all relevant info regarding your pet and in return, they send you a cute box of goodies designed to make them happy and healthy. And mine weren’t disappointed!

The box arrived shortly before Christmas, so I squirrelled it away in order to save it for Christmas Day as a collective present under the tree for the two of them. It was so chaotic unwrapping presents that morning and the cats were spooked by a toddler running around all excited with wrapping paper so it took a while for things to calm down enough for them to come back and let their true curiosity take over.

But soon enough they were whiskers deep into everything… Winnie instantly favouring the toys and Fred thinking only of his stomach (to the point where he actually nabbed the IAMS food pouch out of the box and stole away out of my reach into the garden to scoff its contents down uninterrupted. Greedy piglet.)

I was so impressed with what they received though. This box contained so much! Literally full to bursting with christmassy themed toys, a blanket, yummy treats and even some cat grass for me to plant to aid their digestion and stop them munching away on my real lawn. There’s even a little booklet included inside, with handy hints and tips to help with your pet care. Everything was of top quality and the cats have had a purrfect time playing with their new toys and munching on their treats over the festive period. It’s even stopped them from hunting because they have been playing with their toys inside a lot so the local mice and shrew population are particularly grateful to Pawsome! 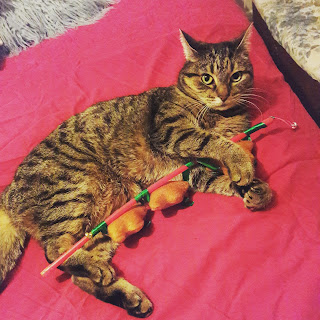 So, thumbs up all round from this household. Well, cat’s don’t have thumbs obviously, but you catch my drift. It has just been so nice to give two very important little members of the family a well deserved treat and has reminded me to stop appreciate them more.. meows and all!

For more information on how to get your own Pawsome box, see here. Boxes start at just £14.90 per month (which is a bargain seeing as each box contains at least £40 worth of items).