This week, I have been doubting myself as a Mummy. A lot. Mostly because BB has been SO unexpectedly challenging. He has upped his demand for bottles of milk in the night time AND during his nap in the daytime. If he is on a quest to do something unsafe or uncooperative such as walk up the stairs on his own… push the electric socket switches or walk in the wrong direction to where we are going, mine or PB’s gentle but firm approach and stepping in is met with a lot of protest… including bottom lip sticking out and sometimes even the dramatic act of flinging oneself in a belly flop fashion onto the nearest chair/sofa/rug/oversized cuddly toy or bed. He also currently refuses to self soothe at bedtime and so I have resorted to becoming a near enough statue in his room after he goes down, standing near the door in the quiet and the dark just to reassure him I am there without actually giving him direct conversation and attention.
Note: This process is mind numbingly boring and with a big bump in front of me, standing still in the dark is even more uncomfortable than you’d think. I refuse to sit though… sitting to me signals that I am there to stay and I most certainly bloody well am not.
And it seems to do the trick very quickly, like its enough just to know I am there for the reassurance in order to settle into slumber. It’s so hard to know what to do for the best! I hate giving him attention and affection as I really believe that it encourages the resistance at bed time, but I also can’t bring myself to sit in another room for chunks of time whilst he screams himself to the point of hysterical… If anything, it probably pisses off the neighbours! So, rather than being at either end of the extremes… I have found that waiting it out before resorting to this statuesque figure in the room type thing has struck a happy medium. Well… almost happy… my back doesn’t feel happy at all!
Milk intake is a constant bug bear and we have fallen into the habit of using milk to go to bed at night, he also wakes up most nights for a bottle and a nappy change and he also demands one and at the moment even TWO before his nap time in the middle of the day. I try to give him water but that gets rejected, I then try a stand off but for example, at nap time today we were out and about in and out of shops and he screamed for over an hour before we caved and gave him milk. Its a battle of wills and I feel like I am on the losing team. And I am a sore loser when it comes to motherhood. I don’t like feeling defeated. 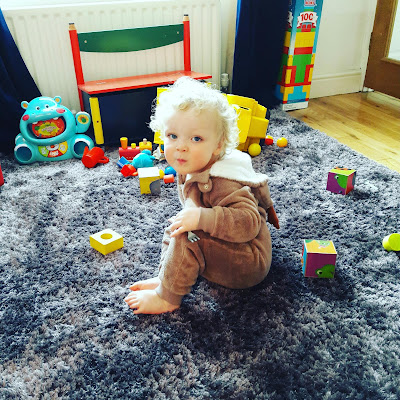 To be honest, I would stand off a lot more if it wasn’t for a few different factors. Self doubt is a massive one. Some days I believe in myself and grapple challenges with tons of confidence. But on the days where I’m not feeling so capable, its easy to let the little voices of doubt creep in, to read online discussions and be influenced by others experiences and ‘helpful hints’… hell, everyone has an opinion on parenting… even people who aren’t bloody parents have an opinion on parenting!
Convenience is the other factor. At 3am, when you are walking into the door frame because your spacial awareness is out of whack, and your eyes feel swollen up like two pickled walnuts crossed with a cats bum, you really will do anything to be able to get the loud, tetchy, lolling about anti christ to just go back to being a sleeping angel again so that you can sink back into your cloud like pillow. It is not the most inspiring time to hold a battle of wills over what looks to be just a mere 5oz of cow juice. Of course, it is much more than that and the real holy grail is to get a stretch of 8-12 uninterrupted hours of slumber a night. But I reassure myself that one day, one day I shall be able to sink into bed and not wonder how many hours I will get. One day…
The protesting is just something I continue to ignore. As laughable as it is sometimes to witness him dramatically belly flopping onto an oversized teddy bear called Cuddles in his nursery because I have deigned to prevent him from electrocuting himself, I muffle my giggles and turn away, seemingly giving him no attention for the outburst whatsoever. Each one is short lived, and any that aren’t usually indicated other issues such as hunger or tiredness or a dirty nappy. I’m not silly… I know we are heading for the terrible twos and that these are the early signs. I’m just taking it all in my stride as best as I can. One day I’ll miss all these little moments and challenges.
Probably…
Additional information and findings from this week:
– BB has grown almost a whole shoe size in 3 months. 7F is the measurement now and we managed to get him two new pairs of shoes with his christmas money. Shoe shopping for infants is a nice idea but the reality is a bit stressful… the sizing is so confusing! And it always seems like they have every other size in stock other than the one you are looking for!
– BB’s obsession with switches led to us calling out the boiler man this week as we believed the boiler had broken. Turns out there was a fault… the main power had been switched off by a switch down low on one of the living room walls. I wonder who could have done that?
– The living room is around 40% furniture… 60% toys. There will never be enough storage to house all the mega blocks BB got for Christmas! He loves playing with them though so I can live with it.
– The christmas tree came down this week and I spent the day cleaning the house and getting things organised. Nesting instinct is definitely hitting and as tiring as it is, it is so nice to have a tidy and organised home! Always strikes me as funny how the place looks like you’ve been robbed once all the decs come down though! 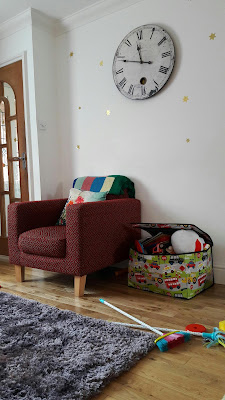