You’d think there wouldn’t be much to report this week seeing as the majority of the time has been spent with all of us being poorly. But, even illness can’t stop developments from happening and time has a way of pushing on through everything regardless.
BB is becoming more and more of a chatterbox, slowly but surely. Mimicking words and randomly coming out with sounds and phrases that leave myself and his poppa bear looking at each other in excitement, surprise, wonder and amusement. Initially saying thank you consisted of repeating the word ‘bum’ over and over, but that developed into saying ta (usually prompted only through the offer of his advent calendar chocolate!) but that then developed into saying ‘ta’ upon the acquisition of every new thing placed into his hand.
Saying ‘up’ and ‘down’ has also become a new pass time, and a small game has blossomed from it where we take it in turns to say each one in succession of the other ie. If he says ‘up’ I say ‘down’ and vice versa. This continues with a little giggle after each round… who knew such small things could be so amusing?!
As uneventful and dull as it may seem to some, to us it is a magical thing to witness. To know a human being from the existence of mere cells, right up through their birth and potato type stature, to then seeing them start to get a grips with language and conversation and all things in between. It makes all the tiredness, hard work and repetition all the more worth it to hear little snippets come out in their proper context.
Our latest word is ‘shoes’. I kid you not, as I put BB’s shoes on his feet and said ‘let’s pop your shoes on’, to hear his little voice annunciate ‘sssshhhooooosss’ made me stop in my tracks and laugh. Pure joy. No other feeling like it! 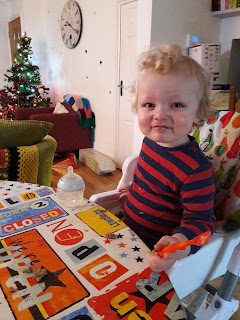 *CATCHING UP
So, I typed all this weekly update for Blogmas Day 21 and then the stresses and hectic activity of Christmas took hold. Appointments had to be kept, presents needed to be wrapped, food shopping needed to be purchased and pregnancy fatigue hit me like a ton of bricks!! So, here is what was carried out for the rest of Blogmas, in a nutshell capacity! What can I say, I got beaten by time and practicality… how do you juggle motherhood/work/home and hobbies in a festive mood all during just a 24 hour time frame?! It feels impossible to juggle it all!
Blogmas Day 22:
I had physio! Not very christmassy but essential nonetheless! My pelvic pain from carrying what feels like a mini elephant in my belly prompted me to do a self referral for physiotherapy and we attended my appointment as a little family of bears in the hopes that the therapist could wave a magic wand and cure my aches and pains. Ha! Well… She actually caused me pain, ironically, in order to locate exactly where and what hurts and to provide a diagnosis. After half an hour of stretching and pulling and twisting, all the while with myself letting out noises that ranged from little squeaks to full on ‘OUCH’es, she confirmed I had pelvic girdle pain (duh) and that there isn’t any cure. Ta very much for that one. I did come away with a very impractical and uncomfortable belt that locks my hips together so that walking is no longer painful… just unbelievably hard to carry out. The even funnier thing about it is that you can’t sit down in it and have to wear it over your underwear but under your outerwear. Not so bad right? It didn’t seem so… until I got back to the car and realised I had to semi undress in order to get into the passenger seat. Many people got a lovely view of my bump and pants in the car park that day. If any of them are reading this then I offer my sincerest apologies for any PTSD  you may be suffering.
I am also attending weekly physio exercise classes for a month starting at the end of January in order to try and help things. Watch this space… I have a feeling they are going to be entertaining for all the wrong reasons.
Blogmas Day 23:
I organised a baking day for myself and my family! My sister brought her two kids round, my mum joined us too and we all took turns baking yummy treats in time for Christmas. I didn’t even take any pictures of what we made, I just lost myself in the company and fun of it all. Blogging failure but completely winning at memory making! It was a lovely day… and we baked so much that PB even had to syphon some of the results off to his office at work. I think they were all quite pleased about that though!
Blogmas Day 24: CHRISTMAS EVE!!
Christmas Eve was actually a little bit lonely… PB plays a rota roulette with work every Christmas, and this year he got scheduled to work day shifts on both Christmas Eve and Christmas Day. I tried not to let it get me down, especially seeing as I wasn’t the poor sod having to go to work. But being without your other half at a time of year when all families are enjoying togetherness is really tough. And you feel guilty for having celebrations without them too. I headed out Christmas Eve to do our last minute food shopping (brave or stupid… not quite sure which?!) and then wrapped up the last few presents to pop under the tree. Pregnancy fatigue hit and BB and I spent the afternoon playing with toys and watching Home Alone. Oh, the irony to that!ha!
So there we have the rest of Blogmas in a nutshell! Thank you for reading through, I’m only sorry I couldn’t find time to do the last 4 days justice but circumstances just got in the way! 2016 has proven to me that all I need is a little bit more organisation…. not sure how attainable my goal to be organised shall be with a toddler, new born and all the new challenges I shall face as a mother to two come March time, but positivity and optimism are definitely things I could use in abundance to see me through 2017 as well as the organisation aspect! Watch out for my new years aspirations list coming soon, will detail more about it all there.
I hope you all had a wonderful Christmas and New Year! Here’s to a wonderful 2017 for us all! xxx
*Note: That week between Christmas and new year really is bizarre isn’t it?? I spent it wandering around almost aimlessly, not knowing what day it was or even what time of day it was and there was a lot of opening cupboards, drawers and even walking into rooms and having no idea what I was looking for! I blame all the cheese and chocolate…