I hate germs. And bugs. And viruses. And basically anything that disrupts the running of our finely tuned and, in truth, already majorly overworked machine that is known as ‘day to day life’.
It’s winter, there are a multitude of illnesses flying about the place ranging from sniffles to full on flu and this week, today in fact, BB has been struck with his first ever dose of tummy flu. It began this morning with high pitched shrieks that then gave way to discombobulated wretches, culminating in PB plonking said retching infant onto me in bed where his reaches finally produced a load of bile.
I was perplexed for 3 reasons all at once but in differing quantities..
1) First and foremost in my mind and the most important of all emotions at that precise point was concern for my poor little boy, who looked pretty confused and distressed at what was happening to him…
2) Next came confusion and bemusement that PB had decided to bring him into the bedroom as opposed to the bathroom… I think the fact we had just woken up (kinda sorta… not really) paired with a lot of surprise at what was happening all had something to do with the lapse in judgement…
And 3) I was gutted because the bedding I was now looking at all covered in contagious slime was a brand new Christmas themed set that had only been on the bed for 48 hours. Typical mum luck really!ha!
And so began operation tend to sick toddler who’s been struck by tummy bug and keep all chances of us catching said bug at bay by dousing every surface, handle, toy…. cat…. with spray bleach and ensure any fabric that comes into contact with contagious matter is whizzed into the washing machine faster than you can say Dioralyte!
Must take a moment to appreciate all washer/tumbler dryers. How the hell did people used to cope without them?! 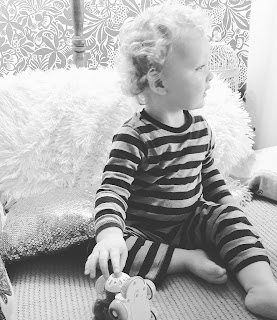 Additional information and findings from this week:
– Am obsessed with the song ‘Will You Take Me Home’ by Jess Glynne. Every now and again you come across a song that really resonates with you and this one stopped me in my tracks with its lyrics and the relevance they hold to myself and PB. Maybe one day I will explain how and why I came to him with a broken faith and how he gave me more than a hand to hold. He will probably quip a joke about he regrets taking me home though!haha!
– GROSS ALERT!
Dealing with puke is my very limit of grossness. I can deal with blood…. poop… mashed in food in various crevices and even puss should the unfortunate situation arise. But puke is just the one that makes me struggle my hardest! I find myself retching too… out of reflex but also out of empathy. And being pregnant, my sense of smell is heightened and… well… you can imagine. So sorry, will stop rambling about unpleasantness now!
– Our cats are still eating and getting fatter each week. Neighbours may be thinking we are fattening them up like turkeys for Christmas Day dinner but it is purely them being greedy. The cats I mean… not the neighbours.
– Christmas present wrapping commenced this week and it was a task to find a comfortable place to do it. I started on the floor and then realised that with a big baby bump that was quite a ridiculous idea so I then moved to the sofa. Upon losing the scissors/tape/ribbon and pen down the side of said sofa for the umpteenth time, I finally settled down to do it at the dinner table. Felt compelled to dress up as an Elf and take an ‘elfie’ with all the wrapping in the back ground. Lack of energy and Elf costume scuppered that idea though. Not to mention, the idea of a heavily pregnant Elf does seem somewhat ridiculous.
– Why does it always seem as thought you have a ridiculous amount of wrapping paper, ribbons, tags, etc…. but you run out after wrapping approx 3 gifts? I misjudge it. Every effing year.