Sometimes, you plod along as a parent and each day feels the same. Things become quite sedentary, non eventful. Development peaks and steadies and you become quite used to things. And then, literally over night, you notice big changes. I know that it is common to feel and think that your children develop so slowly and that things happen so gradually that you can’t pin point exactly how and when a change occurred. I’ve even been known to exclaim it myself before many times, both in real life and on this little blog corner of the world.

Well, this week, myself and PB have both noticed big changes in our little bear. For one… he has grown again. At one point it felt like I was having to move him up a dress size every couple of weeks and he has been in size 6 nappies since well before his 1st birthday in May. But then things seemed to reach an even keel and we have been happily in the 12 – 18 months category with his clothes for the whole summer and autumn. Then, the other morning, as I tried to do up the poppers on his vest and the poor thing toddled off with what could have been a pretty nasty wedgie if it wasn’t for the nappy being in the way, I realised that its time to look for some 18 – 24 months stuff now.

NOTE: I am dreading the day where I won’t be able to put him in vests or sleepsuits at bedtime anymore. Yes he may be walking and talking (more on that in a sec) but at bedtime, as I dress him ready for bed and popper up his vest, I can still pretend to myself that he is my baby boy. Time seriously goes so fast… mother nature just tricks you into thinking its forever by depriving you of sleep as it happens.

The more and more he grows, the more and more I see his personality forming. And what strikes me the most is just how gentle he is. I always thought he would live up to his Taurus star sign and be like a proverbial bull in a china shop. Of course, we still have his whole life ahead, but so far he has been nothing but gentle in his approach to things. Possibly not with the cats…. excitement overrides all his senses there! But there really has been so much gentleness shining through.

One example was at his play group today. There he was, running around the sports hall, attracted as usual to all the brightly coloured footballs that were being thrown/kicked/rolled about by the other boys and girls. BB spent his whole time running up to each child and eagerly awaited being passed the ball. Of course, that moment never came because toddlers are more territorial than cats when it comes to toys! I watched and waited, expecting him to do the whole ‘snatch it away and run’ move that most of them do when desperation hits, but it never came. He simply watched and waited himself, following their movements and becoming a sort of unofficial piggy in the middle. Of course over time I guided him away to a toy he could actually play with himself but I was struck by the patience and gentle nature that he had demonstrated. Hell, after minutes of watching him be piggy in the middle, even I wanted to snatch him a bloody ball and run off with it!

Not that his gentle nature doesn’t give way to temper from now and again. This kid is stubborn and head strong (again, holding my hands up to this!) and if you attempt to tell or show him what to do too much, he gets cross with you. This is never more apparent than at meal times. He is adamant that he can feed himself now, which he can to a point but put it this way, if we left him to substantially feed himself, then Breakfast would last all through lunch and then right on into dinner time. So, I have to say the phrase ‘Mummy help’ as a warning that I shall be stepping in with the odd mouthful every now and again, just as a heads up because if I was so bold as to just grab the spoon, then he would flatly refuse to open his mouth.

And, along with this emergence of a gentle, patient yet headstrong nature, comes a massive capacity for shouting, shrieking and mimicking words. I like to chat but PB is definitely the genetic factor here because this kid is not shy about being loud! We went for breakfast as a family the other morning and he launched into a 5 minute stint of just raising his voice and yelling sounds as loud as he could. He currently loves to say ‘bub bye’ at any relevant opportunity, but literally within the last two days he has started to mimic us as we say things. He loves to close a door to you whilst saying ‘bub bye’, then if you knock and say ‘hello’ he says ‘Whossat?’ before opening the door and pealing into laughter. I never knew what simple joys life could bring until now… the other night he held my Mum hostage in her bathroom with this game but even after the 10th time it hadn’t got old!

Other little things are manifesting… Soft play bricks are being scaled with curiosity whereas a week or two ago he wouldn’t have looked twice at them. Even the sofa is gradually becoming a climbing frame as confidence builds. He actually sits on the sofa and watches telly like a proper little boy, rather than at awkward angles or horizontally like he’s done up until now. 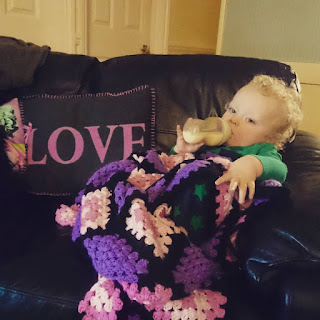 That is why I am so pleased to have this blog. Pictures are important and videos are amazing documentation. But, writing these little weekly updates will really keep a record of all these little aspects that make up this big part of my life. The biggest part of my life really.

– My cats are always hungry. Always. If we fed them on demand they would rival Santa after gorging himself through Christmas night on a gazillion mince pies. They don;t have worms, they don’t have high metabolisms, they are plain greedy and fat. Perhaps they’re sympathising with my pregnancy?
– I am proud that I have stuck to my Blogmas and uploaded the right quota of blog posts this week! It is actually rather difficult finding new material to post every day, especially if you try to piece it around a very full life! But I am really enjoying it, and I hope you are too!
– New shoes shall be being purchased for BB this week! Along with vests and tops and trousers… pretty much everything.
– Trying to acquire vests for a toddler aged 18 – 24 months is nigh on impossible!
– I have consumed waaaay too many satsumas this week. I had the exact same craving when I was pregnant with BB as well. It could be worse… luckily I haven;t had any urges to chew on dish sponges like I did back then. Give it time though, give it time!