Every year, for as long as I can remember, I have had an adventure calendar in the run up to Christmas. Picture one’s at first, followed by chocolate one’s as I became older and for a brief stint before motherhood (when I actually had a little bit of spare cash and no guilt about treating myself to things I wanted rather than needed!) I even bought myself a Beauty Advent Calendar that bestowed skincare and makeup goodies to me all through the festive period… it was glorious!
Nowadays, pennies are pinched but up until a couple of weeks ago I still had even higher expectations from the whole advent calendar situation, only this time it wasn’t for me.. it was for BB. But, like I say, lack of funds and most importantly time and energy, have meant that despite having grandiose ideas of making him an advent calendar out of felt and embroidery, or a bespoke hand carved wooden one with drawers hiding an intricate array of treasures lovingly handpicked by yours truly…. I have in fact found myself reverting to type and panic buying a dairy milk chocolate one in Asda that is so flimsy, each morning as I open a door, I rip half the entire bloody cardboard off with it as well.
But, to BB, it is still a magical thing. Well, that is what I am saying it is. I think it’s highly likely that instead of seeing and experiencing the wonder of Christmas each morning, he in fact just sees the chocolate and all other significance is wasted. As I am trying to piece the cheap, ripped cardboard back together and making whimsical gestures to how lovely and colourful the festive illustration of the day is in the little window… BB is usually already across the room nibbling on his morsel of chocolate and onto his next object of interest. Usually the telly or his yellow toy truck.
And is it any wonder? I have to keep reminding myself that he is a little being aged the grand total of 18 months and that expecting him to grasp the notion of Christmas at such a little age is completely ridiculous. Baby steps are taken… literally. For example, he loves the coloured ornaments and the lights on our tree… so much he tried to eat them, but he doesn’t yet know why we have a tree. To be honest. Neither do I… why DO we have trees?? I digress! The point is he has made that progress since last year, when he was 6.5 months and didn’t even acknowledge said Tree.
I have come to realise that, through having all these high expectations such as the ones I list above in relation to advent calendars, I have in fact almost missed out on embracing the beautiful reality. It doesn’t matter what type of advent calendar I give BB, it is the act of taking part in the tradition that counts. The fact it is something that I have always taken part in at christmas and am now helping him take part it. A passing on of traditions. Seeing his face light up every morning when I reach to get his calendar off of the book case is so sweet and really makes my enjoyment of the whole thing even more special than ever. 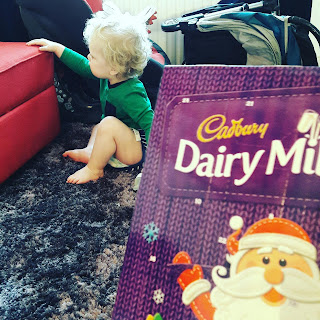 Now… The only flaw is trying to explain that all 24 chocolates can’t be consumed at once… I have to admit, that part of the experience has been far from magical! Give it time though, he will learn. That’s what traditions are all about!