Me to Father Time: ‘C’mon dude…. give a mum a break once in a while would you?!’.
Seriously. Time is not full of forgiveness, it just keeps on going and you have to either keep up or catch up. Which is exactly what I am doing here, with BB’s ‘weekly’ update. I really am going to try and get back into doing a weekly post for him, I have been so busy keeping up with all of his developments (as well as all my own with this second pregnancy) that I have struggled to document them all in written form! But, my baby brain has clung to a few key moments so let me catch up and then I will keep up as of next week. Yes. So I will dammit!
Firstly, I am seeing signs that this marvellous 18 month old boy is going to be a complete chatterbox. Which, seeing as both myself and his father are well known for our conversational abilities, is hardly at all surprising to be honest. He is piecing together the first fundamental basics such as ‘hello’, ‘bub- bye’ and the precursor to a proper thank you which is ‘ta’*. Not only is it super cute to hear his voice using these new words but to witness them being used in their proper context makes you puff up with pride… like an over zealous puffer fish.
* Somehow; ‘ta’ sometimes gets swapped for ‘bum’. Trying not to laugh when handing something over to be met with a sincere ‘bum’ is extremely difficult. Must note to keep straight face at all times.
Parks and open flat grassy or paved areas are now my friend. I’ve taken BB on brief jaunts to the swings before and he entertained the whole idea as best as he could when he was just enough able to perch awkwardly in the seat and smile at being gentle swung to and fro. Nowadays, he is toddling about all over the place and taking a real interest in everything he comes across. Nothing like seeing the pure joy on your child’s face when they discover something new and amazing! He spent 25 minutes admiring a concrete spherical shaped bollard on a shopping trip I made last week. So much so that he was devastated when I had to shepherd him back to the car. 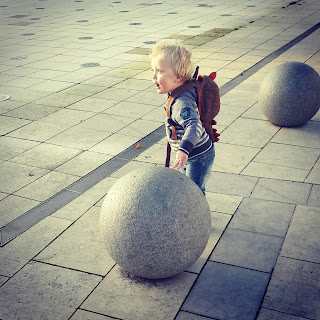 Which leads me to my next observation… we are experiencing a hell of a lot more of his temper! This placid, almost completely angelic ball of putty has started to form opinions and attitude. He is asserting himself with tears and whimpers, sometimes even with physical demonstrations such as flinging oneself on the floor and rolling about in a bereft fashion… like some sort of thespian actor who has just found the storyline he’s portraying a little bit too much to handle.
It can be hard not to chuckle, and on a certain level, I am pleased he is developing his sense of self and feels he can express and assert how he feels about things, not to mention that this is the only way he can really do so at the moment until his speech truly does catch up. But when he is crying hot tears and pitching deafening screams about having to leave behind a ball of concrete acting as a bollard, and onlookers are nervously laughing in a bid to empathise with what is happening to me on a grown up/parental level, I simply have to mentally and emotionally lock down, crack on and fight the resentment of his outburst shining the social spotlight on us for all to see.
I ignore tantrums and carry on, business as usual. I neither interact nor encourage the behaviour by giving it any attention. Once it passes I praise the fact it is over and then distract away from what has happened. For now, it is all I can do and I have to just remind myself that it is all just part of this journey called ‘parenthood’.
I am embracing doing more activities and overcoming elements of my anxiety more and more as well. Sounds so cliche but I really am proud of my little steps in the right direction. For example, we regularly attend an activity morning at least once a week to socialise and burn off more energy and as tedious as it can be following BB around in circles whilst he chases a ball for an hour, the happiness he shows from going along with his pink  cheeks that glow from all the action once the hour is up, just humbles me into keeping on and not letting social anxiety stop me and in turn, stop him, from enjoying things.
I’d love to try and speak to other mums but the reality is that it’s just not possible. A lot of them sit and chat and let their kids run around all over the place because it’s a contained area but I feel too anxious to be able to approach things that way. Not only because I’m watching for any accidents that may happen (kids collide with one another all the time!) but also because I have to mediate between BB and other kids almost every minute because one minute you’re toddling along fine and the next minute can result in the devastating scenario of having one’s ball/toy/soft play item snatched from under one’s nose. Or oneself can become the snatcher. I also secretly love watching the joy on his face as he darts about and if that means that for now I have to pass up a bit of chit chat then I’m fine with it. 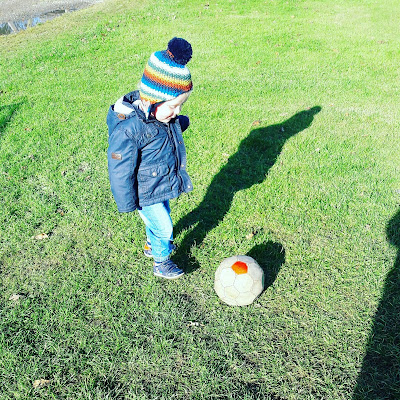 Mealtimes I am not fine with though. I bloody hate them. I inwardly dread each one and offer up yummy food only to have it flung across the room by way of experimentation. Dinner time is more successful as by that time of day he is actually really hungry, but breakfast and lunch get mucked about with daily. If it wasn’t for the fact that the floor gets such a beating and I get so demoralised having my cooking rejected then I wouldn’t mind so much. I have to just remind myself that he will not be a full fledged adult flinging his chicken curry across the dining room and that a lot of it is down to figuring out how to feed himself. Which he is actually starting to do (in a semi proper fashion) nowadays. It ultimately boils down to me feeling like my efforts are rejected followed by watching my clean floors and walls and surfaces get splattered with all manner of food graffiti. I’d put down plastic sheeting if I thought there was any point but the kid has actually got a good arm on him and, therefore, a good ranges. Cleaning wipes are my friend though!
Sleeping is another hit and miss scenario. We get glimmers of hope on the odd night or two where he sleeps from 7pm till 5/6am and myself and PB exchange sleepy, hopeful glances and exclaim phrases such as ‘THAT was a good run!’ or ‘He slept through!’ only to then be back on a run where we are up changing and resettling him once or twice a night. It’s by no means as grim as it could be, and the beaut of a kid is rarely up before 7.30/8am, so we have upsides, but 18 months of broken sleep is gruelling. Then again, it’s probably best we don’t get too used to snoozy bliss because come March time we will be starting it all over again with BB2!
Yaaaay…..
So happy to be up to speed on BB1`s weekly updates now! Look out for them every week on Wednesdays!