Feeding a baby/toddler is an epic task isn’t it? From day one, it is a topic of endless discussion and debate, a cause for worry and anxiety and at times developments happen that make you want to jump for joy and react a bit like Rocky Balboa when he manages to reach the top of that massive flight of concrete steps (I should know what they’re called but I don’t and I can’t be bothered to Google it… so sue me!).
BB started off with a feeding tube in ICU, where alternate feeds of Cow and Gate and any nectar my boobs could produce were administered every 2 – 3 hours until we came home and I breastfed every hour and half for 6 weeks and expressed in between like some deranged cow. Then we went onto formula feeding after a battle with some pretty severe reflux and colic, and by 4 months; he was eagerly sampling small bits of banana and mango before we gave in at 5 months and permitted him to have baby rice and porridge.
Fast forward to now and we give him a whole host of foods, some days they are eagerly chomped on, others we have to mimic trains and aeroplanes to get it anywhere near his mouth! I flit between thinking we feed him too much, to then seeing his rib cage when he stretches out whilst being changed and panicking he is like a little malnourished sparrow!
Only recently, I actually filmed the moment that he chomped down on a piece of toast and peanut butter, so overjoyed was I that he was independently feeding himself some breakfast. Never did I ever think I would be so jubilant over witnessing someone eat some toast, it was like Christmas!
But it is understandable that we put so much pressure on ourselves to navigate our offspring around the obstacle course that is learning to nourish themselves. We know they can’t survive without it, that a strong appetite aids development and sets them up in life. That eating is one of life’s pleasures and that it is our duty to show them how to enjoy it and savour it. We’ve all seen those programmes about fussy eaters, where grown adults will only eat chips and beans or something. I break out in a cold sweat at the thought of BB existing on beans and oven chips in adulthood… can’t bear the thought!
But it is comforting to know I am not alone. 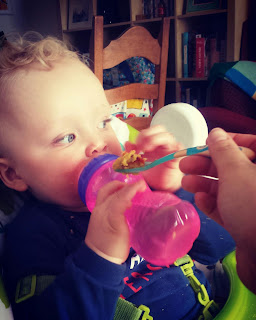 I’ve had a few of my friends messaging me this week about their frustrations with regards to feeding. I remember the early days of motherhood, the pressure to perfect breastfeeding and the guilt and disappointment at switching to formula. I remember the frustration that hit when BB didn’t latch on or drink his full quota from the bottle. I remember the exhaustion of sitting up all night with a hungry baby who just wouldn’t feed and settle, the sore nipples and the hot, itchy and tingly discomfort of engorgement. I remember seeing other mums feeding their babies with ease and wondering why we were finding it so difficult. I remember being convinced that BB was losing weight and that I was a great big failure.
But, to all my friends who are struggling and having their confidence in themselves as Mums challenged…. don’t be discouraged. You are all doing an amazing job and take comfort, as I am, in the fact that you are not alone in your struggles. Babies are individuals, no two are the same because hey, they’re human beings. Some have ferocious appetites and eat everything in sight. Others are grazers and snack happy. It’s just the way of life, to make us all different.
I’d like to say it gets easier, maybe it does. But from a mum who danced with joy at the sight of her son eating a few peas this week, I am still yet to be convinced that we have completely cracked the case on eating. Even if eating is happening, you question your decisions on what you’re giving them to eat. You find yourself and your other half having full on conversations about what has been consumed in the day, and will send pictures to each other that document the moment a new food was tried and accepted (only this morning I sent a pic to PB of BB eating a bagel for breakfast because I was proud). You will also feel proud of yourself after discovering a new edible option on a food shop and take more pride in preparing their food than your own. You will feel absolute despair at having a lovingly cooked meal thrown onto the floor and will cry into the freezer as you pack away even more portions that will go unused and thrown out in 6 months.
But just remember that you are not on your own, that you are doing the best you can and that you are not failing any tests. And just look at your bundle…. chances are they are happy and thriving and completely unaware of the stress they are causing. They are fine. And so are you. Xxx
Additional information and findings from this week :
– Laundry. I hate it. It is never ending. I swear there are people creeping in and adding to my laundry basket. It’s the only explanation for why it is constantly resembling a cross between mount everest and the leaning tower of pisa.
– Incidentally, a friend showed me the joy that is the child lock button on the washing machine! Especially helpful as this week a wash cycle lasted almost the whole day and it was only when I discovered BB pressing the buttons that I realised what was happening. We had very clean clothes that day.
– BB is still trying to stand unaided but no joy yet. He falls down as soon as he let’s go of anything and then gives a big sigh of frustration. No rush though, he’s fast enough just crawling!
– For some reason, BB likes to eat the tail off of his rocking horse, Coco. The poor thing had a lovely tail in the beginning and it is losing volume by the day. Can’t get him to eat a sandwich but some synthetic hair is so yummy?!
– Despite hoovering daily, there still seems to always be little bits and bobs on the floor that BB likes to make into his own version of appetisers. This week I have removed a small piece of thread, a piece of grit, a cat biscuit and a sequin from his mouth. How? Why?! Contemplating breaking up his meals and just strewing them about the floor as then they will almost certainly be eaten!