As time goes on, I am starting to notice little shifts in BB. Shifts that are distinct indicators of leaving babyhood behind and that are propelling us forward into toddler hood. Of course, so many of these have already happened… like the day he first sat up or the day he held his bottle on his own… but I guess denial was my friend and I was able to convince myself that babies stay babies for much longer than everyone says they do.
But this week I’ve noticed things changing at a faster pace. BB has been crawling beyond his usual boundaries of our living room rug and has been pulling things out of cupboards, storage boxes and any bag he can get his hands on. He has discovered the kitchen, with all of its wondrous cupboards filled with intriguing bits and bobs. The very fact that cupboards exist, with their never ending fun of opening and closing doors leaves him close to hysterical with glee!
But it’s the washing machine that truly tips him over the edge and holds his attention and gaze extensively. With its glugs and gurgles, beeps and blips and constant spinning drum, all else seems to disappear and he will make a bee line for it with the same determined glint in his eye that I have whenever I see a ‘SALE’ sign on the high street. 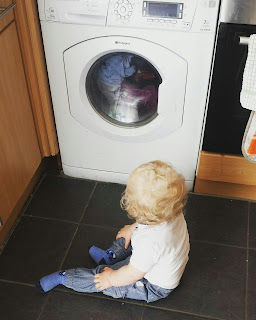 Even the hoover causes him to come eagerly crawling along, and he cruises along the wooden flooring by holding on the the hoover handle whilst I work… like a kind of multi purpose sledge. This very awareness, interest and curiosity in all household things signifies that Mr Tumble and the Twirlywoos aren’t enough anymore. We have gone up a notch in the entertainment factor of parenthood! 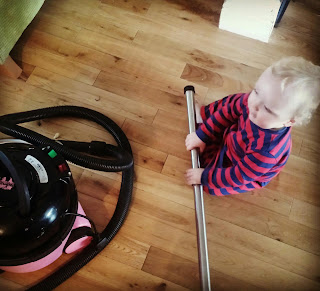 Which is great because it’s the summer and there’s lots to do, plus it makes doing the housework much more amusing with a little buddy to keep me company. Give him time and he can help me with chores… as it is I’m considering strapping dust mitts to his knees and hands to help clean the floors!

Talking is another change that has happened this week. Up until now he has been a happy little babble baby, but last week he started to say ‘Car’ a lot without any context for the word so we just put it down to his trying out sounds. But this week I arrived home from work to find both father and son in the throes of bedtime, so I went to leave BB’s nursery and prevent bedtime tears only to hear ‘Mama… mama mamma..blub bub bub…mama’ being urgently called. Bedtime tears almost came from me I’m telling you.. the best sound I have ever heard!
NOTE: if I am reading this in 10 years time and have become tired of being summoned with the term ‘Mum!’ five trillion times a day, remember this golden nugget of time where it was first mumbled and cherish the memory of it skipping your heart beat… as opposed to escalating it… along with your blood pressure….
Additional information and findings from this week:

– I recently completed an online course for an Award in Education and Training from home. It took me three months, a lot of late nights in front of a lap top, text book studying during lunch and nap breaks as well as 12,000+ words in essays and a nerve racking practical assessment where my pelvic floor almost failed me. But, I passed and am now able to teach hair courses for a job I have had lined up since the beginning of the year! I couldn’t have done it without PB’s amazing support… or him allowing me to test run my practical assessment on him in the car before I did it for real. What can I say, the man has the patience of a saint!
– Babies can get places fast even when they’re crawling. I had my first ‘Where the f**k is he?!’ panicky moment this week and found him disappearing into a kitchen cupboard when only a minute or less earlier he had been at my feet in the living room. Road runner has nothing on this kid! 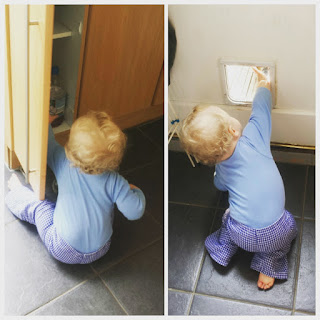 – Cat flaps are under rated for their play potential…. I reckon Toys r Us could make a killing with them. Am waiting for the moment I walk into our garden and find random things from the house have magically made their way outside. My nephew had the same obsession which resulted in my sister discovering a tin of baked beans at the foot of their drive way once. As long as it isn’t one’s phone or house keys then all is good right?
– The enamel project continues to grow in pace as we have discovered tooth number 9 is breaking the surface! There is a lot of drooling going on which teamed with the destruction to our kitchen cupboards and their contents gives me an insight into what it must have been like to work on the set of the movie Turner and Hooch or Beethoven. This kid even chews my shoes… I sometime wonder if I have given birth to a human or a dog.
– Which is also ironic as I am being hounded (excuse the pun) by my better half to give my consent on getting a puppy. As much as I love dogs and would love to give one a home someday, that day is not yet. Daily walking whatever the weather, poop scoops, sleepless nights, chewing anything and everything in sight, training… well, its just not appealing at the moment. Mostly because all of the afore mentioned list are already being dealt with due to my small human! Part of me thinks of the old philosophy of ‘in for a penny, in for a pound’ and I am a true believer of no time ever being perfect for life decisions because life isn’t perfect. But, there are certainly better times than others and I will feel it when that time comes to pass. In the meantime, I can appreciate fluffy cute pictures on the internet and appreciate other people’s pooches. Let me get through nursing human babies, then I can move onto waggy tailed ones.
<div align=”center”>
<a href=”http://www.twinmummyanddaddy.com/search/label/binky” rel=”nofollow” title=”Linky”><img src=”http://i1371.photobucket.com/albums/ag291/Twinmumanddad/BinkyLinkyBadge_zpsa75e2ca6.jpg” alt=”Linky” style=”border: none;” /></a></div>