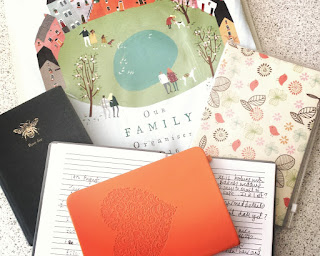 I love lists. And stationery. Mostly because they go hand in hand. I have umpteen notebooks, diaries, calendars, post it’s and tiny notepads littered all about my vicinity. My desk has atleast 3 notebooks scattered about it, my handbag has a diary and 2 phones in it, the kitchen counter has a calendar the size of Mars on top of it, resting against the wall, and the fridge has a magnetic filing system dotted about it’s front amongst little momentos from holidays gone by (NOTE: What’s a ‘holiday’ again? I kind of remember but can’t…. quite… nope, it’s gone).

I have always loved lists and from the beginning of my working career, I was always to be found with my notepad around for jotting things down. But since growing my business (and a baby) things have gotten so out of hand! And it all boils down to one simple fact: There isn’t enough room in my brain for everything anymore.
I always thought baby brain was a myth. That it was an excuse for mothers to forget to pick up their dry cleaning or come home with all the groceries except the one thing that had actually run out. Now I realise that it is not an excuse, it is actually a very real thing that has you staring into space trying to remember a simple word like ‘fork’ and you end up putting said groceries in the wrong place (as you can tell, I am still mortified at mixing up placement for our milk and washing up liquid a few moths ago!).
So, I make lists. If something significant comes into my head or circumstance then I write it down. I have scraps of paper with random numbers on, tasks I have to complete and errands I need to run, appointments to be kept and voice mails to call back to. But, lists don’t get things done, they merely show you what needs to be done. Which is where the trouble ensues…
Emails stack up, responsibilities mount and before I know it, the stationery I hold so dear begins to daunt and overwhelm me. It all seems so hopelessly impossible when you have a baby hanging onto your leg whilst you stand at the calendar trying to prioritise things from ‘the list’, or no, really that should be plural… ‘the Lists’ and as you tick off one thing you notice your other list which needs 3 things to be added to it. It really does feel never ending and as though you are walking up a very steep muddy hill in well worn flip flops!
As a result, I have been trying to work out a logical solution and I think it boils down to amalgamation and organisation. A mass of stationery with lots of little lists is bound to feel overwhelming so I think I shall try cutting it all down to one notepad that I list tasks to do day by day. Upon researching the whole thing, the general consensus is to prioritise, set yourself and complete 3 tasks per day. Am a little befuddled about how I am going to select 3 tasks from 333 but I’m prepared to give it a go. At least then it won’t feel so never ending!
Incidentally…. the best thing about list keeping is the ticking off bit. Does anyone else even write down a task they have already completed just to be able to tick it off?? Pure. Satisfaction.

– Another teething wave descended onto our household this week, leaving us all sleep deprived. Screaming, thrashing about and grumpiness became a nightly theme, even for us adults… and possibly even the cats too. I have a feeling our neighbours probably hate us now, I can hear them cough during the night (the walls are that thin!) so they probably got an earful of a BB’s shrieks and our sssshhhing round the clock. Bloody stressful and soul destroying, the entire enamel business. You can’t do much to help your baby’s pain, you get resentful of it for keeping you from your slumber and then you feel guilty for being selfish when your baby is putting up with lumps of bone cutting through their gums. Still, 7 down… another 13 to go. Yay.
– We went swimming for the second time this week. PB was working, so I took BB on my own and he loved it! I dunked him under water for the first time too (bloody nerve wracking experience that had me cursing myself for being so bold and left me convinced he could suffer secondary drowning for the remainder afternoon!) and upon coming back to the surface he giggled. We have a water baby, no doubt about it.
– BB is determined to stand up. We help him to his feet umpteen times a day, and he tries hard to do it himself unaided too. He’s managed it once, but mostly gets stuck in some kind of downward dog yoga pose which then prompts him to yell for help. He will get there… as always, I am in no rush. Standing leads to walking which leads to running which leads to a higher chance of ending up in A&E. 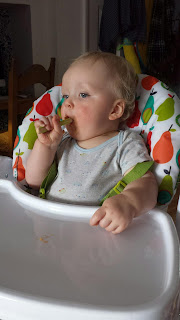 – Independent feeding is another theme this week. If I load up the spoon, all goes relatively well. I just have to stick to letting him try at evening meal times as he ends up decorating himself and the room so it is easier to clear up and I can plonk him in the bath afterwards. For the record, apple sauce is very sticky. And weetabix turns from nutritious breakfast food to wallpaper paste to cement in the space of 15 minutes. 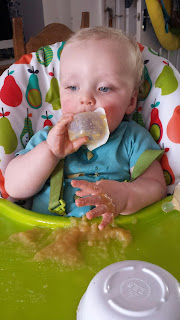