I have always liked my own company. It’s a family joke that when I was younger, my mum arranged a play date and before the other kid’s mum had even left I tugged on my mum’s arm and said the infamous line ‘Can they go home now please? I’ve had enough’.
Mortifying for her but innocent honesty from me. It is a sentiment that I have rarely grown out of. I find socialising quite hard… which a lot of people would balk at because on the outside, I come across as a chatty, outgoing and sociable kind of person. Hell! I even chose one of the most sociable professions going by becoming a bloody hair and makeup artist?! Go figure that one out.
The reasons behind my social anxiety are known to me. Painful memories from childhood, sensitivity to other people, paranoia of being watched and judged, vulnerability… plain and simple shyness. I’m shy by nature, it’s just who I am. At 14 I was still begging my mum to purchase my bus ticket for me… so painful was it to try and make eye contact with a stranger and summon up my voice to ask for my fare.
Some can skip off out of the front door without a second thought but I bide my time. I stall. I find getting to a place on time pressurising, and my response to pressure is to hold back and bury my head in the sand. Or under a duvet… same effect. I try to go minute to minute but the mind races ahead to all the different steps it takes to get myself ready and out the door. Then there comes what I like to call ‘the red zone’, that bit of time where you go from being on track to becoming late. Once I hit ‘the red zone’, panic brings on adrenalin which spurs me on to run about like a mad person, cramming all the steps it takes to get ready in 45 minute into 15 instead. I procrastinate over odds and ends, social media keeps me distracted from what I know I need to do… which is to just get ready!
Small things leave my heart racing and my skin crawling. Ordering food in a restaurant. Any form of public transport. Just public interactions in general! Asking for any sort of assistance in public is torturous (pride fuels this one) and once led me to walk around the supermarket for 25 minutes looking for cous cous because I couldn’t bring myself to ask where it was (for anyone else in the same shoes … try world foods).
Answering the phone or even making a phone call is like the front line for me. Nerve wracking and sweaty palm inducing! My tongue ties itself in a knot and I lose all coordination with my brain and voice. Most people will notice I text or email, its simply so I can think clearly and not make a prat of myself. It interferes with my day to day running of things…. especially with regards to taking bookings for work and making more social plans to get scared of.
I’m writing about it now because something happened to me a few weeks ago. I was due to meet a friend in town with BB and we ran ridiculously late. Not because of my anxiety for once, this time was down to a crazy amount of traffic that left me and baby waiting in the car at a stand still for over an hour! Said friend got angry about waiting and left for home, missing us by just 5 minutes. Her anger at me (via text message of course) touched upon my always being late and cancelling things at last minute. She shamed me about it and it struck me as much as a slap in the face. And since then I have felt really out of sorts, more so than normal!
I am terrible at time keeping. But not because of being lazy or disregarding the importance of other people’s time. Simply because sometimes I can’t physically get somewhere because it is emotionally hard to get there.
Perhaps it’s my fault for pretending to be something I am not. For giving off an air of confidence when the complete opposite is the truth. In the right company, and the right setting, I can certainly feel comfortable and socialise with ease. But for the most part, the world seems such a scary place and my home plus the little family I have in it seem much easier and nicer to submerge myself into.
Motherhood challenges this side of me like nothing ever has before. There’s pressure to put all my neurosis aside so as not to influence BB and cause him to miss out on socialising. Interaction, social stimulation and constant activity is something we, as mothers, get encouraged to do and mummy guilt hits if these needs aren’t met.
So I keep trying and testing my boundaries. I think I would feel so responsible if BB was unable to ask for a bus ticket or answer the phone. But, if he does follow in my footsteps and get shy and anxious over seemingly little things, I won’t shame him or make him feel like he is crazy. I will hold his hand and tell him it’s ok. That he won’t be hurt and shouldn’t feel ashamed. I will make him see that we are all warriors fighting our own inner battles that others can’t see. And I will reassure him that I believe in him, and that I have his back. 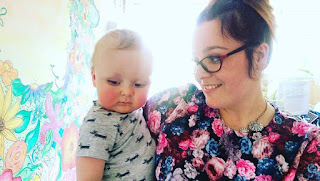