This week has been one of those weeks that could probably be illustrated with a tumble weed blowing across the page or something (note: anyone else think of Mr Tumble when they read that sentence too??).
I spent the majority of the week fighting off yet another cold, alongside BB who was lovely enough to share germs with me. That makes 3 this year for us already. It’s a funny thing when your number of menstrual cycles matches the number of viruses your body has contracted. Actually, it’s not funny at all. It’s bloody terrible…. no pun intended. Trying to look after your child whilst fighting cramps and a head full of congestion is rough. And babies seriously don’t know the meaning of a duvet day!
The Mummy Guilt is not great for aiding these ailments either. Several times this week found me on the sofa fighting to keep my eyes open whilst watching BB playing in front of the TV. He was fine, happy as anything, engrossed in the joys of the Twirlywoos and Mr Tumble. But I kept feeling bad for not interacting with him and getting us out of the house for fresh air, convincing myself that I was the weakest and crappiest Mummy on the planet. I’ve witnessed other mums soldiering on in parks and shops with blood shot eyes, red shiny noses and tissues stuffed into every pocket and there was I, barely able to sit upright at the dinner table!
How do they do it?! On one particular day I only just about managed to carry out the basics of nappy changes, naps, meals and bath time whilst dosing myself up on paracetamol and Vicks. I didn’t sing any songs, play any games or even change BB out of his pjs…. or myself for that matter. The housework went by the wayside to the point that the work tops in the kitchen couldn’t be seen! I felt like a complete unhinged failure.
But then I realised that I was doing what most mums do – giving myself a hard time over nothing.
Sometimes you just have to accept limitations as being like little rain clouds, and reassure yourself that they will eventually lift so that you can feel better and brighter.
Additional information and findings from this week:

– I failed at BB’s first Easter. I had a notion of decorating the house for Easter, conducting an Easter Egg Hunt and doing a cute photo shoot with BB dressed up as either a chick or a bunny. No bunny ears, no easter egg and no cute basket to collect them in either. We did, however, spend Easter Sunday at my Sister Amy’s house for dinner where we had a lot of fun and giggles…. and a lovely dinner consisting of a chicken pie cooked by Amy and a peach crumble cooked by myself. Mary Berry would be proud of us! 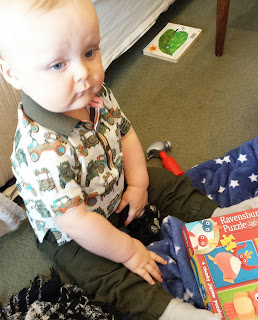 – BB received a cute outfit from my mum (Nanny Nuts) and a Twirlywoos Puzzle from his Auntie Ada (Amy) for Easter.. both of which thankfully made up for my epic fail in the role of the Easter Bunny!

– We have been trying out brand new recipes for BB this week and they have all been well received. I have nothing against jars and ready meals for babies (which is a complete surprise as I almost always cook from fresh) but now that our house move and my return to work are all behind us, I felt like it was time to focus more on encouraging BB to try new flavours and textures, plus I’d missed cooking and playing around with recipes. This week BB has tried Marmite (he’s a lover, not a hater of it… yay!), parsnip mash, chicken pie, peach crumble with custard and butternut squash risotto. I am on a roll! As is the dishwasher!
– We now have a Great Big Who Twirlywoo which has joined our already acquired Toodaloo. We are aiming to buy the complete set, not only to make BB sublimely happy but also so that myself and PB can act out the entire theme song sequence…. we are so rock and roll!
<div align=”center”>
<a href=”http://www.twinmummyanddaddy.com/p/binky-linky.html” title=”Binky Linky”><img src=”http://i128.photobucket.com/albums/p184/emily_higgins1/BinkyLinkyBadge_zps6c7e0adf.jpg” alt=”Binky Linky” style=”border:none;” /></a></div>