I love bath time. Always have done. When I was a kid, from as far back as I can remember, I used to play with my toys in the bath for hours and hours. I’d make up stories in my head and (much to my family’s amusement) use a variety of different voices for the sake of every character’s authenticity. When I emerged from the bathroom, all pink and prune like, the scene I’d leave behind me would resemble a cross between Flipper and Toy Story. It was fantastic!
Then of course I grew up, and bath time became more refined, often spa like with its candles, books and a chilled glass of wine on the side. Showers took over for quickness and convenience and sadly, my imagination became muted by the demands of every day grown up life…. nobody has time to dream up whole other worlds, characters, dramas and voices when there’s jobs to do, bills to pay and shopping to get.
Then, BB came along. And gradually, play time at bath time is making its way into my life again. In the beginning, things were all geared towards establishing a routine and getting through all the feeding demands, nappy changes, reflux episodes and sleepless nights.
NOTE: we still get all of the above but on a lesser scale…. although the reflux appears to be gone completely, HURRAH!
But now, what with BB sitting up unaided, developing his motor skills non stop and interacting with us all the time, play time has become an essential part of bath time, as well as all throughout the day. I never thought it would happen but we have a massive pile of brightly coloured, plastic toys I’m the corner of our living room (all neatly stacked in a toy box mind and if it over flows, things get given to charity to make room for others. I’m not letting them take over dammit!) and I have even taken to up ending a bag of flour onto BB’s high chair tray so he could sit and play, making patterns and hand prints in the flour. Thankfully we have a good hoover otherwise I would never have attempted it!
But bath time remains one of my most favourite times of the day. It signals that it’s almost bed time for baby which means my quiet evening time is just in sight, always a comfort after a hard day’s mothering! But, most importantly, it means we get to have time splish splashing about in the water, blowing bubbles about, singing songs and playing with rubber ducks. I’m also trying to introduce story time to BB and use bath time as a good window of opportunity to read a book to him. I’ve attempted it at bed time but he tells me off for keeping him awake so bath time is the next best option!
Of course, there’ll be a day where BB ushers me out of the bathroom (and any room!) for some time to himself so for now, each play/bath time I get I treasure. It gives me full audience of his imagination and a glimpse back to how mine used to be. And in years to come, if he ever reaches to light a candle at bath time, I’ll take away the matches and pass him a rubber duck instead… 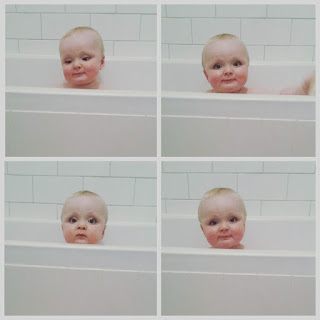 Additional information and findings from this week:
– BB took a tumble earlier on in the week after poor PB tripped over the cat whilst carrying him inside from the car in his car seat. He initially recovered from the bump fine, and after observing him for an hour, PB put him to bed and resolved to check on him after an hour to see if he was easily rousable. Ten minutes of trying to wake him proved useless so PB rang 999 for help and received an amazing and prompt response, with three different teams of support arriving at the house to check BB over and help him wake up.  After 30 mins BB finally recovered consciousness, just in time for myself to arrive home from work to a bedroom full of paramedics, a stress drained PB and a giggling BB who was happily being kept distracted from proceedings with an episode of the Twirlywoos on the iPad. Not the welcome home from work I was expecting and I almost needed hospitalising myself from the shock of seeing the ambulance on the driveway but alls well that ends well. We got to have an adventure to Brighton’s Children Hospital so they could keep BB under observation for a few hours and we were home in one piece by 3.30am. The real casualty of the night was PB, who had to live through every parent’s worst nightmare. I wish I had been there to give comfort but in hindsight, I would have probably panicked and been anything but comforting. PB has always kept a cooler head than mine and he handled the whole thing brilliantly. The cat, however, is most definitely in the dog house for the foreseeable future.
– BB now weighs 12.8 kilos, which is just over 28lbs!!! So proud that he is a thriving, solid built lad but me oh my does my back hurt?!
– We attended our first hard core kid’s party this weekend, complete with Bouncy Castle and lots of happy kiddies jumping about in excitement. BB found it a bit overwhelming and buried his face in my shoulder before making lots of disgruntled yelling noises. Considering the most BB has ever seen by way of company is a group of adults eating takeaway in front of the box, it’s pretty understandable for him to feel a little bit out of his depth. I’m looking into baby groups as we ‘speak’ as he seems ready to socialise a bit more now and the time has come to make him more comfortable in big groups. I, on the other hand, am going to need a little bit more persuasion…. I suppose one isn’t allowed to pack a rum and coke in a baby bag for dutch courage and patience?
<div align=”center”>
<a href=”http://www.twinmummyanddaddy.com/p/binky-linky.html” title=”Binky Linky”><img src=”http://i128.photobucket.com/albums/p184/emily_higgins1/BinkyLinkyBadge_zps6c7e0adf.jpg” alt=”Binky Linky” style=”border:none;” /></a></div>