If you can picture a rung out flannel, hanging limp on a washing line after being washed on a fast spin cycle due to being chewed on by a rabid dog with scabies…. that’s pretty much how worn out I am feeling right about now.
This week has been bloody INTENSE! We’ve managed to move house, rear a teething child and I have officially gone back to work part time. I say part time but I am self employed so even when I’m not out working, I am doing stuff online or paperwork or writing notes down somewhere so it’s technically semi full time.
Despite my self pitying intro, this week has actually been really positive and our little family have accomplished so much in such a short space of time. If someone had said to me at Christmas that within 5 weeks we would be out of our little 1 bed flat and into a comfy 2 bed house, I would have checked your temperature for signs of being delusional. 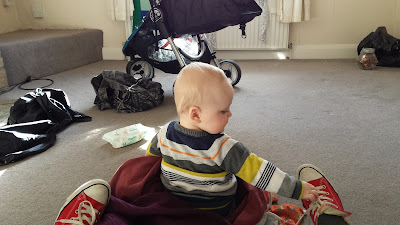 But here we are, three bears, 2 cats and a fish tank (well almost, the fish are joining us this week once we figure out how the hell to transport them?!), all unpacked and getting used to new nooks and crannies. We are home wherever we are together, but you do have to get used to a house. New smells, different creaky bits and pieces plus all your stuff is all over the place. It took me 15 minutes just to locate my hairbrush the other morning! Ha!
BB now has his own bedroom (finally! At almost 9 months old?!) and the first night was hilarious as he took to sleeping alone in it like a duck to a pond whilst PB and I spent the best part of the evening watching the baby monitor as if it were the telly, running up and down the stairs and fighting the urge to camp out on the floor beside his cot. His room is beautiful, with hand stencilled safari animals all over the place, so come the morning after our first night, we were woken up to the sound of BB babbling at the monkeys, elephants and giraffes surrounding him on the walls. I do miss him being across the room from me whilst I fall asleep but I’m so happy he’s enjoying his own little space. And PB and I have our space back too!
Going back to work has been easier than I anticipated as well. You get it into your head that you have forgotten what to do, and that people have forgotten you too, then the day arrives and you realise that its just another day and that people are happy to see your face again. And also that you are happy to see theirs! It’s like coming back to work after a really big holiday… only not hard to do because maternity leave is certainly not similar to a holiday. In fact, I can venture the fact that work now seems like the holiday! Time to have clear and concise thoughts, less luggage to carry, no need for eyes in the back of my head, no longing for peace and the return of the ability to eat a sandwich with BOTH HANDS at lunchtime! And a sense of self that isn’t just labelled as ‘Mum’. As I have said so many times, motherhood makes the world change yet stay exactly the same.
Additional information and findings from this week:
– Moving house with a nearly 9 month old baby is hazardous. My sister rescued him from the cardboard box hell on moving day and you realise how much you can actually get done without needing to stop every couple of minutes.
– Having two outdoor cats cooped up indoors for 2 weeks to ‘imprint’ on their new home is far from ideal. Opening any windows or doors induces panic and paranoia that they have slipped past you in a split second.
– Ironically, the cat I was concerned about settling has taken to the change beautifully and spent the first night sprawled out on the bed without a care in the world, whilst the cat with gusto decided to hide INSIDE the lining underneath the sofa for 3 days before being coaxed out with Dreamies.
*NOTE: Dreamies is seriously like crack for cats… no idea what they put in it but it stopped me from convincing myself we had crushed our feline every time we sat down to watch telly so it’s got my vote*
– Getting used to a new house is a funny business. For a split second every morning, I’ve been waking up a bit confused and bewildered. It’s taking me double time to get ready in the morning because I don’t know for certain where everything is, and making anything to eat of drink in the kitchen means opening cupboard doors feels like a game show and I hear a voice in my head saying ‘Let’s see what’s behind door number 2!’.
– Moving men save a lot of hassle, time and energy but they seem to not know how to read the word ‘Fragile’ or deduce the difference between room functionality because I found a whole load of kitchen stuff in the bathroom, living room stuff in the bedroom and bathroom stuff in the living room. The highlight had to be when they said that they had put all baby related stuff into BB’s room and when I went through it, a vast majority of things were actually PB’s. Makes sense…. lego, books including the Chronicles of Narnia and a variety of soft toys could work in a nursery….
Here’s a couple of sneaky peeks into the new abode. I’ve only got some of the living room for now as it is the room that is most ‘finished’ apart from BB’s room but he is currently asleep in it as I type! 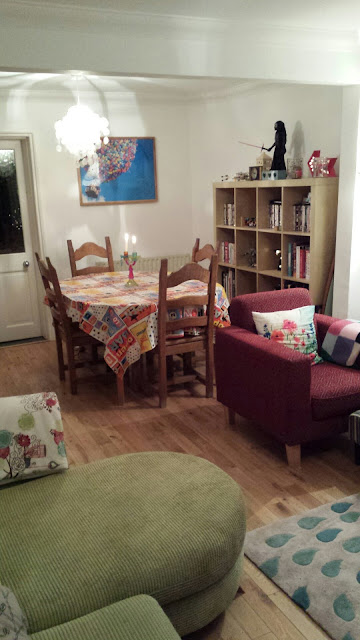 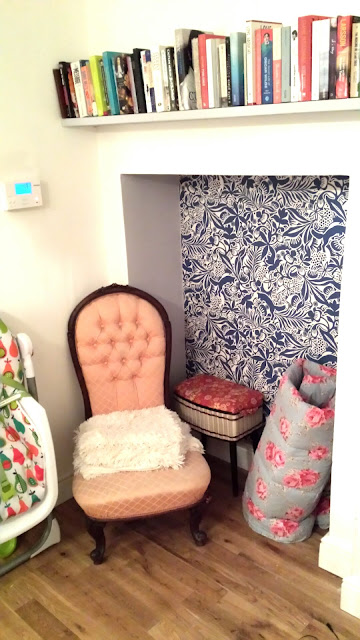 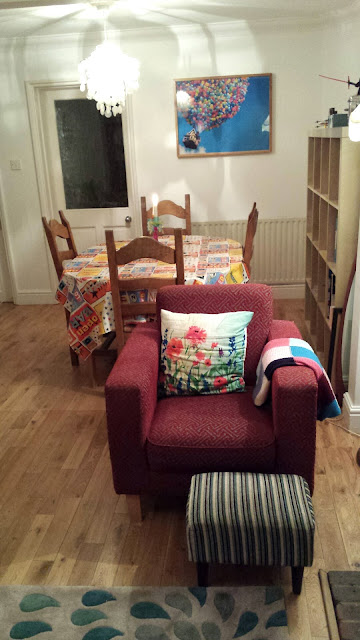 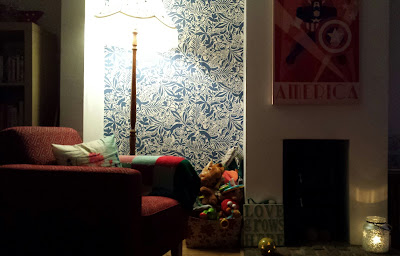