I avoid going to baby groups. There you go, I’ve said it. For some, they are a hub of social activity and give relief from a monotonous routine of laundry, nappy changing and feeding whilst ‘stimulating’ babies brain cells to come to life and function at full capacity, resulting in a new skill and motivation to learn, learn, learn. For some that is, but for others like myself it isn’t.
There are several reasons for this. First of all, the timings are always inconvenient. Nearly all classes I’ve seen host their groups smack bang in the middle of BB’s naptime. So I risk either paying a tenner and having him sleep through it, leaving me clapping and smiling like a dork by myself, or having him awake and cranky with the potential to ruin the class for everyone else. Secondly, who has a tenner every week to sit and watch your baby touch fluffy and brightly coloured things whilst sitting on your lap on a rubber mat as you try and cross your legs with ligaments that still resemble over stretched elastic bands?? And thirdly…. don’t hate me but….the conversation leaves me cold.
I can talk to a brick and get a response. I LOVE chatting! I embrace meeting new people and making new friendships and think it is healthy for BB to see me doing so too. But in the baby group settings that I’ve found myself in, it hasn’t been so easy. No one wanted to talk or make eye contact and there were only 2 interactive options on the menu: singing songs and talking shop.
Hence I found myself sitting cross legged, in a group of women, singing ‘The Wheels on the Bus’ whilst comparing notes on what milestones our babies have reached so far.
‘Well, ‘enter name here’ was sitting up at 6 months and then crawling at 7 months and then walked at 13 months…. is yours crawling yet??’
‘Can yours roll over yet? Little so and so was rolling at 5 months!’
‘We’re just beginning to pull ourselves up… but we don’t feel ready to walk yet…’ (for a moment I literally thought she was learning to walk as well!)
‘Is yours crawling yet?? How old is he?!… well, give him time, they all do it in their own time, he might even skip it altogether’.
Blah blah blah blah BLAH.
Don’t get me wrong, I find this conversation subject interesting enough, but it can start to wear on you after a while and before long, you are convinced that you have done something wrong, created a cbeebies watching cabbage and will still be trying to squeeze a teenager into a jumperoo!
PB pointed out to me only this week that it depends on your own mindset as opposed to anyone else’s. I can either view the above conversations as interesting statements and a conversational transaction of information, or see them as a competitive challenge and unhealthy comparison that makes babies into racing opponents. I am a naturally competitive and defensive personality, therefore I view it as the latter. And it grates on me.
It is so easy to be hard on oneself as a mother, to analyse every little action and detail of your parenthood and compare notes to the person next to you like you did in school over your maths test (sometimes motherhood feels like one loooong maths test!). So conversations like the condensed ones you find in baby group, or at any mothers meeting really, can feel like the equivalent of finding out someone else has a whole different load of sums written down.
But, regardless of the calculation theory, we all end up with the same number. After all, I doubt I will end up with an 18 year old who is mute, lies down all the time and can’t feed himself. Then again, that’s just a typical teenager… right? 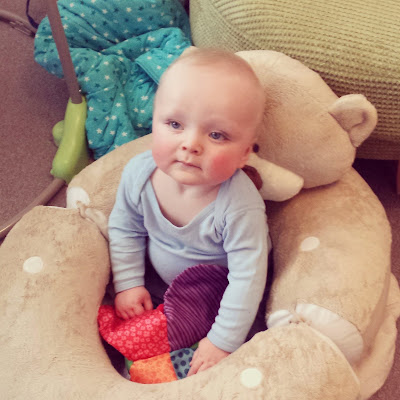 Additional information and findings from this week :
– BB has a way of making you feel rather inadequate. Jump through hoops to create a positive reaction and at very best a giggle from him, and on an off day you shall be met with a look of disdain and a very deep sigh. Can’t help but laugh about it, I’d be pretty unimpressed with people constantly trying to make me laugh all the time too. The fact he hasn’t punched us is amazing really.
– This week BB stood on our laps for 10 seconds! This may not seem like a big deal, but up til now his legs have been like jelly and he’s refused to put any weight on them. We find it funny that he can do all the things he ought to be, but makes a conscious decision not to. Can be called lazy, I call it clever. He has a whole life to use his legs, may as well soak up the time for soley sitting down.
– Bath time has reached new levels of fun! Now BB can sit up, we can play more games in the tub than we could when he was laying down. I keep the tap running low and he attempts to grab the flow of water. He also splish splash sploshes his way through the whole thing, leaving me looking like I’ve been caught in the rain! Considering an umbrella to hold during bath time as a result.
– Second tooth is weedling its way up from the gum alongside first tooth so this week has had its fretful moments with luminous cheeks thrown in as well. 2 down, too many left to go. Wish I could do it for him!
– Packing boxes to move is all well and good until you need something. Then you feel stuck, trawl through 5 boxes in search of your item before giving up and going to buy replacements. Funny but inconvenient, as I found out this week when I needed tampons. Well done me.