Hi Guys!
I am currently living in what I imagine the stock warehouse of a supermarket to look like…. Everywhere I turn are boxes with ‘Dortitos’ or ‘Walkers’ or ‘Comfort’ emblazoned across them, making me both hungry and pressurised to do the laundry.
No, we haven’t suddenly become bulk buyers of snacks and fabric conditioner. We are however, moving house… Yay! With a teething baby…. ouch! 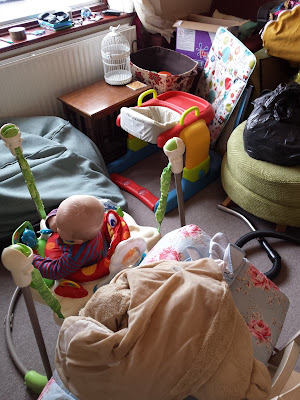 I have moved house before and that was a big enough task to handle, but having a baby around for this one is crazy. I am packing bits and bobs in small spaces of time, constantly pausing to pick up baby for a cuddle in order to ease the pain his teeth are causing or searching for random baby proofed objects to throw at him (not literally!) in order to buy ‘just five more minutes’ to cram belongings into a box.
Baby isn’t as naive as I hope him to be though, and soon enough I am being screeched/yelled /growled at to come and play/feed/bounce/cuddle/change/rock him with only the fullest of attention. If my gaze wanders, or my phone is picked up, or I scratch my nose, then I promptly get told off for shoddy behaviour and have to resume 100% adulation.
This works until around 11 am and then I just tell him to stop being unreasonable and throw another distraction his way. On the really bad days I get out and take him to a shop or on an errand to tire him out and give us both a change of scenery.
This week we went to the park though, along with my sister and nephew, where I gave Baby Bear his first ever go on the swings! The park is one we used to go to all the time as kids, and I was way more excited than he was by the whole thing, fuelled by a load of warm memories and nostalgia. 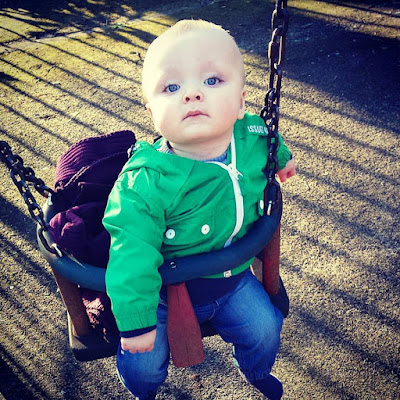 But he humoured me enough to snap some pictures and then my sister was kind enough to carry him around for a while so he could see all the goings on. It was freezing cold but we had a great time and it was lovely to see my own baby and little nephew climbing and playing on things I used to enjoy as a kid. 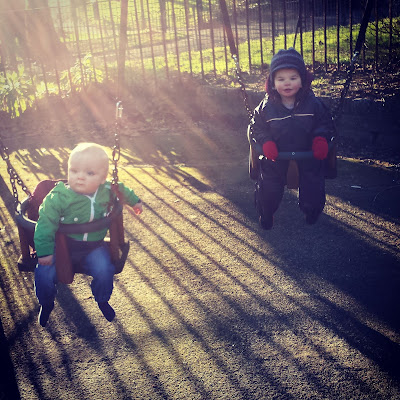 Additional information and findings from this week:
– I’ve purchased a book called ‘The Magic of Tidying’ by Marie Kondo and it has completely revolutionised my wardrobe!! I used to think I had a wardrobe that was full to the brim but I was actually just storing things all wrong. I’ve mastered the folding technique that Kondo suggests in her book, and her general philosophy of only keeping items that ‘spark joy’ really helped me focus on clearing out a lot of junk that I had unwittingly accumulated. We all have a random trinket box containing a screw for something we don’t know needs fixing, a button to a dress we no longer wear or own and a spare key to a door that no longer needs opening. I filled 6 bin bags for the dump and 4 boxes for charity, and that was only from my bedroom!
– Baby has his second tooth!!! It feels like only yesterday that he got his first, in truth it was only last month, so I’m glad he has gotten them through quickly. It really is horrendous. There was a point this week where his cheeks were so inflamed that they looked almost purple! When he is older and all of his teeth are through, I’m going to let him know how much I admire him and them take him out for a massive, fuck off piece of chocolate cake.
– Baby is also managing to feed himself finger foods! A while ago I tried to give him things to feed himself but he didn’t understand the whole hand up to mouth combo and most things were just smushed together in his fist but now, he is throwing himself into it. I almost cried the first time I witnessed it, partly through pride and partly through the realisation that yet another milestone is being reached. They are misnamed I reckon…. they should be called ‘yard stones’ or ‘feet stones’ as I swear a mile is meant to take longer to reach… 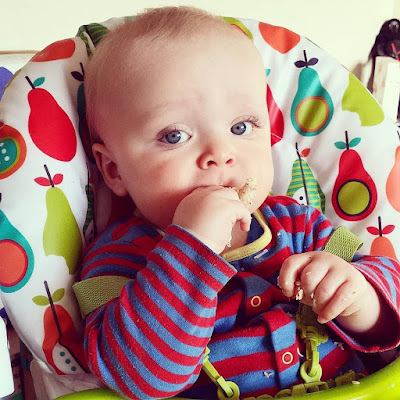