I have come to the conclusion that I am a complete nutter. Fruit the frigging loop, batty, nutty as a fruitcake… completely bonkers! And why have I come to this conclusion? Simply because I refuse to go to sleep when I ought to.

I am lucky. I have a baby who likes to nap 3 times a day like clock work and who actually begs me to put him down to sleep of an evening. He follows routine, is in bed by 7.30pm every night and for the majority of the time gets up just once in the night for a feed that he now takes independently whilst I crawl back under the duvet due to a strong desire to hold the bottle himself. For the first time this week, he even slept through for a whole 12 hours!

So, what do I do during this time? Do I watch crappy telly and lose my brain to nothingness for a while? Do I soak in the tub with a good book and just exist in my own golden moment of peace? Do I tuck myself up in bed and revel in glorious shut eye? No… because I’m an idiot. I spend the time networking, researching, learning and building an online presence. I (try to) reply to my friends and clients for work promptly and I return phone calls and emails that I didn’t get a chance to during the day. Don’t get me wrong, I’m not moaning, I love my job and my hobbies and of course, my friends and clients too, they are what make me tick alongside motherhood and keep me sane.

But I am going to have to start disciplining myself a little better as I have noticed that I am going to bed later and later and that is not conducive to effective motherhood and parenting…. or standing upright. Babies cannot be reasoned with. They get up when they want and there is nothing you can do to stop them. Well, you can distract them a little bit with a precariously balanced ipad showing re-runs of Bing Bunny and age appropriate development videos on Youtube but the most we get out of that is around 40 minutes. We used to have a snooze button, now we hear independent renditions of Old MacDonald Had a Farm and Five Little Ducks.

I have never been good at going to bed early. Subconsciously I cling onto a day, an irrational fear of letting it go and watching it disappear takes hold I think… which I know sounds insane, but as we have covered in the beginning of this post, that is extremely likely. I keep trying to set myself a bedtime of 10.30pm, which gives me 3 hours to eat dinner, chill out and carry out projects. But I feel like an inmate being told that it’s ‘Light’ Out’ and my rebellious streak comes out, social media beckons me with the flashing light on my phone from across the room and before I know it, its gone midnight and I am racing downhill towards a night feed, a few hours of restless sleep and then breakfast time.

It’s yet another typical example of trying to hold onto a sense of self and make time for me, whilst still being the best Mummy I can be. Parenthood: one of life’s most challenging balancing acts…

– Teething is never ENDING!!! The poor little things having to deal with such a horrible process…. and poor us for having to see them through it. Teddy constantly looks like a Hamster thats eaten a traffic light and even had bleeding on his gums this week. The new tooth actually has a serrated edge?! Milk teeth sound really cute and bunny like but they are brutal… they should call them hacksaw teeth, or bloody bastard teeth.
– Now that he’s mastered sitting up and rolling (when he can be bothered!), he is bored of these newly acquired skills and gets frustrated. He obviously thinks that his lack of movement and momentum is my fault (always is of course) and so I get yelled at, screamed at and a lot of imploring looks in order to motivate me to transfer him from place to place. I don’t mind of course, am very happy to oblige, but he is just so huge! It’s like lugging a baby hippo around the place! He is gorgeously stocky and solid, which is awesome…. just not for my back. Or shoulders. Or any joint in my body.
– The Jumperoo is being used more and more as a result of baby being stronger in his posture. He managed almost an hour in it the other day! He hasn’t realised that he can bounce up and down in it if he wants to. Then again, he probably has but is clever and likes the fact we do it for him instead. Either way, it’s brilliant. I managed to do a whole load of chores whilst he busied himself with the bits and bobs the jumperoo has on offer. He looks quite serious whilst he’s in it… almost boardroom levels of serious. Could be the next apprentice.. probably more capable than the majority of cabbages they have on there! 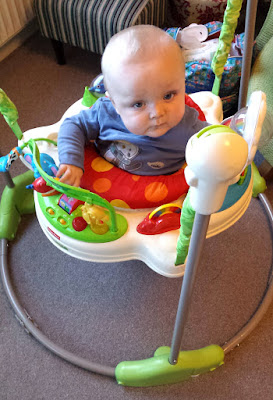 – Baby’s don’t realise their own strength. Have been punched in the face, poked in the eye, slapped round the head and my hair is pulled up to 20 times a day. Literally pulled out in some cases, he has clumps of it in his hand most of the time. If not careful, will end up looking like Sinead O’Conner singing Nothing Compares to You and crying…. from hair loss.