Hi Guys!
When I was a little girl, like most other kids, I was always SO excited for Christmas. The idea of the Big Man in red coming down our chimney and leaving presents out under our tree plus all the decorations, yummy food and general jolly atmosphere that spread through the house, really made it seem like it was possible to actually feel magic. Excitement was the type that made my tummy flip in anticipation and Christmas eve was always a night I struggled to sleep.
Then, somewhere along the way, it all changed. Santa became a figment of my imagination, the presents under the tree had to be bought and paid for (not to mention wrapped) and the yummy food became a source for never ending washing up and a stressful need for coordination!
And this year hasn’t been without its stresses! I found myself zooming around Asda on Christmas Eve, suffering trolley rage and looking like a deranged elf, chucking last minute Christmas wrapping and random crap like dishwasher salts, mini sausage rolls and 6+ months age appropriate toys onto the cashier’s conveyer belt with the same urgency as everyone else. I had an energy meltdown that left me unable to speak at times (a real rarity for me I must say!) and we were still wrapping Teddy’s presents at 1.30am Christmas eve night (technically Christmas day!).
But, despite all the disillusionment and tiredness that the preparations can bring, the countless times myself and PB snapped at each other, or I muttered ‘for f**k sake!’ under my breath whilst envisaging a mass exodus for all the people in my way at Aldi. Despite all that, this has truly been a magical Christmas and was made more so because of it being Teddy’s first one! 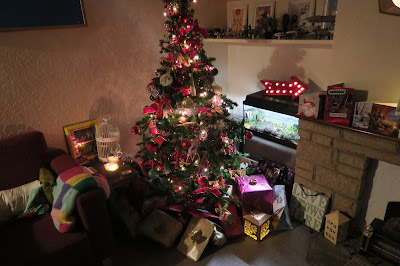 We spent Christmas Eve with his Nanna, Uncle Daniel and Aunty Iza (PB’s Mum, brother and sister in law) and then we spent Christmas Day morning at Aunty Ada’s (my Sister Amy’s) house for breakfast before bringing Nanny Nuts (my Mum) back to ours for a chilled out afternoon and sleepover. Of course, he’s only 7.5 months so the magic of tradition is still yet to be taken on board. But, I think you can feel love whatever your age and he was showered in it! Lots of hugs and time spent with his nearest and dearest. He managed to unwrap half a present, but the suspense was killing us so we dutifully stepped in and ‘helped’ him do it. His face lit up at the sight of all the shiny wrapping paper and despite still teething/being surrounded by a hub of activity and over excitement, he was full of smiles and looks of bewilderment. 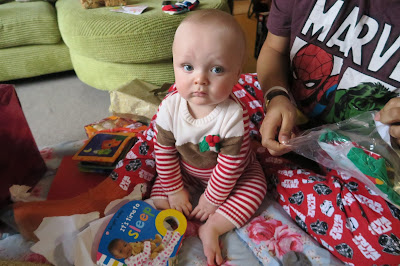 My best present this year couldn’t be unwrapped. I received contentment this Christmas. We were at home, my mum was next to me asleep on the sofa, PB was dozing in the armchair and Baby Bear was napping in a nest of cushions and blankets on the floor. A disney movie was on the telly, I had a glass of tipple in one hand and a fistful of dry roasted peanuts in the other… and I felt all warm and fuzzy. I realised how easy it is to misplace magic when stresses take over in life. It happens by placing importance on things that don’t deserve it, and therefore Christmas can turn into something that’s more of a chore than a treat. The magic I felt as a kid wasn’t due to what we ate or received (or at least not completely)…. It is actually about being together and enjoying company. Feeling relaxed, humble…. grateful. And treasuring all that is good in life.
Additional information and findings from this week:
– Christmas prep before having a baby was stressful. Christmas prep AFTER having a baby? Pass me the rum.
– Babies will inevitably find the wrapping for presents more attractive and entertaining than the present itself.
– Sneezing in the middle of Asda, during Christmas rush, on Christmas Eve, with a weak pelvic floor results in a rather wide stance and hurried walk through the aisles before a return trip to home for some dry pants and trousers. May endeavour to pack spare clothes for me as well as for baby in future, ‘just in case’. For the record, was mortified. And grateful for wearing black jeans instead of blue!
– Must stress the importance to avoid all supermarkets on Christmas Eve. Or even on Christmas Eve Eve. Reminded me of the wilderbeest scene in Lion King.
– Cutting tape to wrap presents is up there with one of the most tedious jobs known to man. And it kept sticking to itself, rendering it useless. Not to mention, have been finding it stuck to my clothes for the past 4 days now…
– Baby is now holding his bottle on his own for most feeds, reaching out for things he wants to have and crying if he doesn’t get it/has it taken away. He’s getting more and more confident with his sitting up and keeps lifting his bum up off of the floor whilst laying down. Am wondering if he will skip crawling and just opt for standing up but we shall see. The prospect of him being mobile both thrills and terrifies me…
– The sound of his laughter makes me want to both laugh and cry. If I could bottle up a sound and treasure it forever, it would be his giggle. And his babbling. 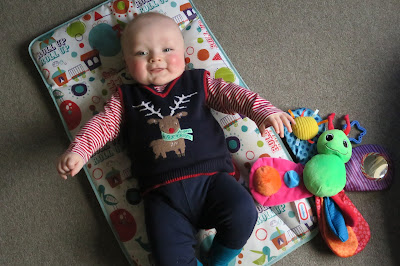