I always thought that there was a reason behind baby’s developing clingy behaviour. I thought that it must be something to do with how frequent you pick them up and give them cuddles, or lack of reassurance that you are there for them and that they are safe no matter what. I thought that a clingy baby meant a clingy mother.

Again, as with many preconceived opinions I obtained before walking my miles in the Mummy shoes (I picture them as looking like my red converse all stars, practical and comfy), I was so completely and utterly WRONG!

I don’t class myself as a baby wearer. I can’t wear my baby, he’s probably over 24lbs now and being a human crane isn’t up there as one of my life goals. Which is a shame, because Baby Bear is insisting on a constant whinge attack for my ears, and the only way to create peace is to pick him up. This clingy/whinge type thing hasn’t been helped by teething or a massive cold virus that descended onto both of us either. He sounds like he’s a 40 a day smoker and his cheeks have been so red at times that he could give Rudolph and his nose a run for their money! As a result, I have been trying to stay indoors as much as possible but being cooped up brings a whole other host of problems. He no longer gives a shit about what is going on around the room when we are home. He just wants me and he wants me practically nose to nose, eye to eye, cheek to cheek. If he could crawl back into my womb, I think that would be his idea of awesome. I feel for Kangaroos to be honest… it must be so hard on them! Then again, they have a pouch don’t they? We should have gotten a pouch.

I am holding my ground and carrying on as normal though. It’s hard to choose between going deaf or carrying a small hippo on my hip but I tend to reason that deafness is less painful and detrimental to getting around! Plus it is important for him to learn that he has to get on with things and can’t be attached to me all the time. I will not give in to this clingy phase dammit. I refuse to! As long as I have lots of things to throw at him (not literally though… although it is tempting!) then all is fairly manageable. I move him from room to room in his bouncer and have a host of items that make the grade for baby entertainment.

Speaking of which, a highlight for this week (and also in keeping with channelling our inner kangaroos) has been our newly acquired Jumperoo! It is a nightmare getting him into it because he doesn’t stretch his legs out straight, so if I’m not careful, they tend to miss the leg holes and cause a look of panic on his little face so a lot of precision is involved. He’s not clicked that he can bounce in it of his own accord yet either, so PB and I take turns in helping him which brings out a look of wonder and a smile. Five minutes is the average amount of time it takes before he loses it and wants to get out though…. Cue more whinging! 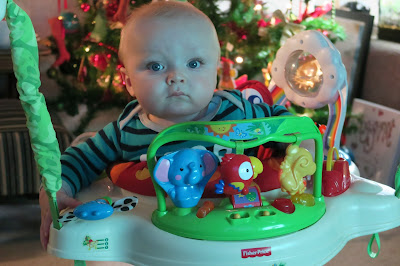 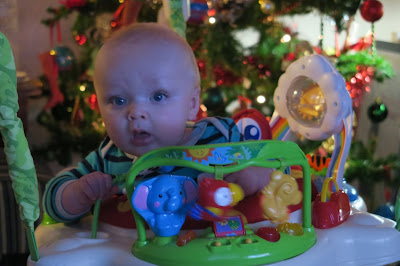 Additional Information and Findings from this week:

– Plastic measuring cups, plastic measuring spoons, masking tape, silicon cake moulds and empty food packets are way more entertaining than an expensive Fisherprice jumperoo. Ours was kindly donated to us by someone we know, but if you are contemplating buying one, raid your kitchen for baby friendly bits and bobs. Cheaper, less hassle and it will save your hearing!
– Despite changing a nappy the same way, multiple times both during the day and night, Baby will STILL somehow manage to wet himself. Usually in the middle of the night, and for a few nights in a row. I’m running out of clean sheets…
– Listening to your child wheeze and cough and sniff and snort is both utterly petrifying and frustrating. Especially because it tends to be worse both in the morning and at night so you find yourself unable to sleep due to the fear of all the congestion in their chest potentially causing them to choke. Then when the need for sleep forces you to submit and shut your eyes and ears, you are awoken from it by a very grumpy baby who is confused by the fact they can’t breathe properly and why can’t you just fix it?
– Babies don’t know how to blow their nose or spit out phlegm. The moment he learns these two skills will make me so happy!
– Trying to manage a home, work commitments, hobbies,  my relationships with PB and friends/family plus bring up a human is bloody hard work at Christmas. I have a whole written schedule up on the fridge so I don’t forget anything or anyone (it happens and is mortifying!) and I have a whole host of lists that makes me wonder how Santa just gets by with one. Then again, he has a gazillion elves doing all the hard stuff doesn’t he? Cheater.