TO SUM UP: WE ARE WEANING!!
Hi Guys!
Since I’d say probably about week 13, Teddy has been finding the process of our meal times very interesting. I’ve tended to sit him facing us whilst we eat, so that he can watch us munching and realise that you can chew food as well as suckle for it.
He didn’t take much convincing though, and soon enough he was beginning to look wide eyed every time we took a mouthful, whilst licking his lips and at times, even jigging about in his bouncer like an excitable puppy!
I’d been told by the health visitor to start weaning at 5 months, but we noticed that a lot of baby foods in the shops were labelled as acceptable for baby’s as young as 4 months. So I took the plunge. My hand was actually forced a little bit too…
One hot and muggy afternoon, upon getting home from a walk around the nearby park, I had one overheated, grizzly baby bear. His teeth had been playing up, leaving him flailing about with red apples for cheeks and after trying teething gel, calpol AND a teething ring I suddenly remembered that we had chunks of fresh mango in the fridge that were lovely and cold.
I grabbed one of the juicy cubes from the kitchen and held it out for him to try. He immediately chomped down on it and the relief flooded his face. He loved the taste of it and gradually the chunk broke down into bits in amongst juice which he swallowed with gusto.
So I made the decision to introduce little bits. On our trip to see Grandad Steve last week we gave him some yummy vegetable soup that Nanny Tracy had made us for lunch. He practically inhaled it. Then we tried him on a bit of scrambled eggs which were also hoovered up. I realised that we were probably jumping the gun a little bit though, so after a couple of days break we purchased some Organix Baby Rice and Baby Porridge whilst on our weekly food shop and have been giving him that at least once, sometimes twice a day.
It looks pretty yummy but I haven’t dared try any yet…. I remember trying baby food as part of a childcare class (or it might have been home ec) and it was all just bland, gloopy pureed stuff. The people just have a great way of making it sound appealing by calling flavours ‘Fruity Apple Porridge’ and ‘Banana and Mango Porridge’. We are Bear’s…. we love our porridge! But this one appears to be Baby Bear’s brand of ‘just right’. 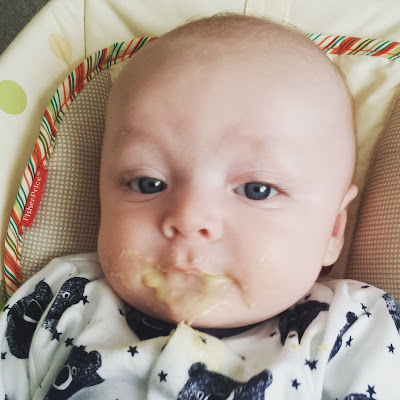 Additional information and findings from this week:
– Teddy’s favourite game is the game of trying to sit up. Lots of wobbles and lurching this way and that…. his head seems to weigh as much as a bowling ball by the way it appears to send him off balance!
– We have been practicing rolling over but due to being so rotund from eating baby rice and porridge, his attempts to roll onto his belly leave him resembling a weeble!
– I had to skip baby group this week due to having other plans but have been attempting to practice my sing song attitude every day. Nursery rhymes get boring but I have been relying heavily on Disney and Danny Kaye’s rendition of ‘The Ugly Duckling’ which has been very popular. Especially at bath time… mental note: acquire rubber duck to make song more interactive.
– Baby Porridge + Baby Sneeze = Mummy Covered.
– Our washing machine’s approach to our seemingly never ending laundry pile reminds me of how I reacted to jogging…. puffed out and pissed off.