Hi Guys!
When we found out that we were expecting our son Teddy, one of the many factors about impending motherhood that left me panicking slightly was finding enough room for us all to live comfortably instead of being all cramped and cooped up. Myself, Paulibear and Baby Bear all live in a 1.5 bedroom flat above a pet shop, along with our two cats… and it was always going to be a bit of a jigsaw puzzle to fit us all in.
I say 1.5 bedrooms because we have our fairly well sized double bedroom and then across the hall is a space verging on a very large cupboard or a very, very, very teeny little bedroom, depending on which way you look at it. Instead of the term box room…. I’d probably class this as a matchbox room, it is that small. Unfortunately, there aren’t any windows or a heating source in the room, therefore it isn’t possible to use it as a proper nursery for Baby Bear to sleep in. But, it has very high ceilings and two alcoves either end which made for brilliant shelf space so we treat it as a form of walk in wardrobe for him. Perhaps, if we are still here when he reaches toddler age and with the help of an electric heater, we may be able to sleep him in there but it would be a very tight squeeze! For now, we have designed it to provide a huge amount of storage for all the things that come with bringing up a baby.
Originally, as you can see in the first image above, it was used as a kind of storage/work room and had a big ugly work bench built in as well as scratched, dented paintwork all around, along with some grubby brown carpet that was worn and patchy in places. We ripped out the ugly work bench first, before taking up the carpet and sanding down the walls to make them smoother and easier to paint. We then took our Deluxe Paint in Mint Macaroon that we bought on offer from B&Q and painted all the walls with it. It’s a really pretty shade that appealed to us mainly because it is a great neutral to go with many other colours and made a nice change from the generic shades of blue that you get bombarded with when you find out you’re having a boy. Don’t get me wrong, I love blue… I just didn’t want to have it slap me in the face whenever we walk into the room. Not to mention, white was another no go, it just feels really cold and clinical to me for a baby’s room. Just a thought as well, have you noticed how it is the go to colour for bloggers and vloggers lately?? Very pretty for Instagram but I just know I’d be scuffing walls and leaving marks everywhere if I tried to be all brighty whitey…. it would last milliseconds.
As I’ve said earlier, the room has two alcoves, one either end, and they weren’t being utilised at all. We added shelves, a hanging rail to each and papered the back wall of them in Marvel Superhero wall paper, comic book style. It really adds a cool pop of colour and jazzes up the shelving. I also used it to decoupage a chest of drawers that we had going spare. Again, we were thinking of hitting Ikea for a white chest of drawers, but to save money and be unique, we opted for upscaling instead. It’s had lots of compliments and I am really proud of it too. Many hours were spent sanding down, painting, gluing on small strips of wallpaper and varnishing that piece… Teddy has no option but to use it until he is at least 60! The wallpaper is also from B&Q and I think we used around 3/4 of a roll, one of which cost just £12 (although currently they have it on for £10 here). 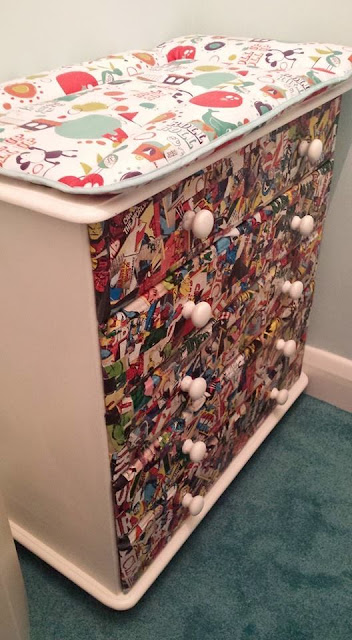 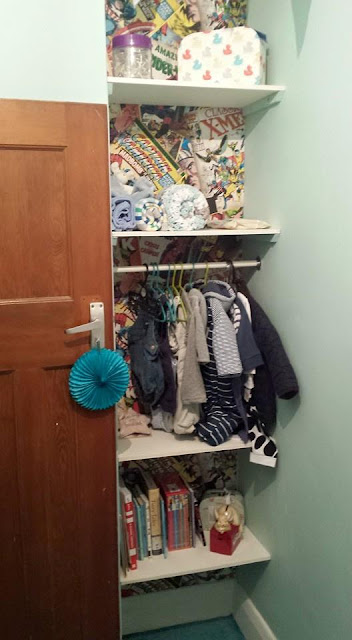 Also from B&Q came our cool wall art in the form of a canvas displaying a quirky almost art deco depiction of Captain America. I love things that don’t automatically reveal what they are, and this looks like a cool vintage image before making you say ‘Oh, its Captain America!’. It’ll stick with Teddy all the way through the years and then I think his Dad will claim it when he leaves us for University…. if he goes, of course…. jeez, he’s only 16 weeks, talk about digression?! 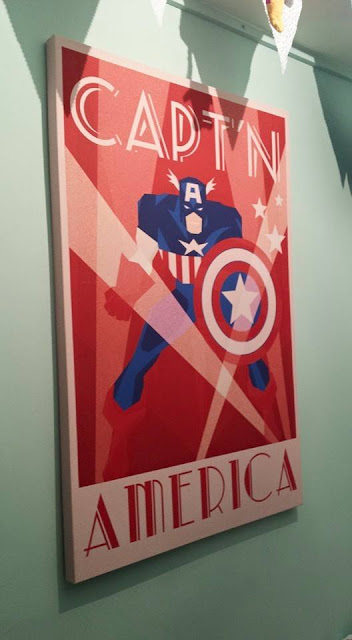 The last major instalment for the room was a piece of teal coloured carpet, which set off the mint macaroon perfectly, as well as also tying in with the vibrant superhero characters. Because of the small size of the room, this carpet was an off cut and cost us just £15… what a bargain?! A lot of carpet retailers actually have off cuts of substantial size, so if you are decorating a small space, it might be worth looking at the off cut section first. 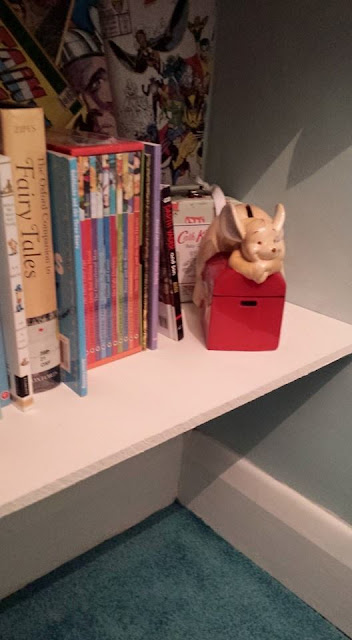 Teddy’s clothes accessorise the room, along with his toys, games and books. A friend of ours bought us a beautiful Disney money box of Winnie the Pooh’s character Roo (see image above) which sits pride of place on one shelf, and a lot of the gift boxes that housed his presents from friend’s after he was born were so pretty, that they make a beautiful display around the room too. My favourites are the little suitcases from Cath Kidston…. had to fight the urge to put them in our room!
So, there you have our Baby Bear’s room! I will leave a list of condensed tips below for any of you looking to decorate a small nursery space on a budget, and if you liked this post don’t forget to share it and subscribe. Thank you!
TOP TIPS FOR DECORATING A SMALL NURSERY
– Maximise your space. I chose to put my shelving in the alcoves to utilise space that would have otherwise been useless, as well as adding shelving that was way above eye level in order to make the most of the high ceilings and prevent the room feeling cramped and overcrowded.
– Use light and bright colours to help lift the space and not make things feel so closed in.
–  Recycle and upscale anything you can. Pretty gift boxes make great storage, jars are great for storing cotton wool and buds plus for keeping little necessities such as nail clippers, scissors and sponges all ready for bath time.
– If you use a chest of drawers, allocate each drawer a category so as to know where to get whatever you need efficiently whenever you need it. We have on for muslins and bibs, one for vests, one for baby grows, one for socks and hats and one for towels and toiletries. Time is of the essence with children and anything to prevent fumbling around like an idiot whilst being screamed at is useful!
– Use your little one’s toys to decorate the space. They are brightly coloured and attract their attention which I think helps them be interested in and identify their own space.