TO SUM UP: WE ARE IN HOSPITAL!

Am currently writing this week’s post whilst perched on the standard uncomfortable chair they always supply whilst sitting and waiting by a hospital bedside. It’s raining, Paulibear is resting on a fold down bed and possibly the minutest telly I have ever seen is blaring out some games how that no one wins at.

Baby Teddy is currently having a stay in hospital after developing a non blanching rash (aka a rash than doesn’t disappear when pressed) and becoming extremely warm and lethargic yesterday afternoon.

You always know when your baby isn’t quite themselves, but we had been to the doctors on Friday for Teddy’s 12 week injections so presumed he had just been a bit peaky from them. He’s also started the dreaded teething so his feeling warm to the touch and crankyness was also attributed to that as well. He was also quite a sleepyhead but again, baby’s sleep for a whole host of different reasons so we had no cause for concern.

I kept checking his temperature which was fine, he had a little bit of a cough but as I have mentioned in posts before, he suffers from reflux which can create coughs so again, it appeared to have an explanation. He was eating well, alert and smiling… his usual, beautiful self.

But whilst getting ready to go out and run some errands, he became irritable and started to scream and go red. Paulibear stripped him off to cool him down and spotted the rash that had sprung up almost within minutes on his chest and we knew it was something more serious than being slightly off colour with teething or post jab blues. Teddy was still all smiles and wide awake so we remained rational thinking it may have even been heat rash as it has been warm weather recently. But once I rolled a tumbler across his chest and it didn’t blanch, I started to get a gut feeling of worry and when we rang 111, they added to that instinct when they directed us to A&E for emergency services. We quickly packed Teddy’s bag and headed towards the car.

Luckily enough, our GP surgery is on our road, and as we left our house, our family GP was passing on an errand during his lunch hour. He saw Teddy, who by this time was looking a little less smiley and a little more distant in his expression, and told us to come to the surgery to get checked out. Paul insisted he wanted to go to hospital but for some reason, I pushed to go to the surgery.

Upon seeing his rash and listening to Teddy’s heart rate, the Doctor agreed his symptoms were cause for concern and said he would get us to the hospital and rang for an ambulance. He then administered a shot of penicillin to Teddy’s thigh, a crucial injection that instantly takes effect against infections…. and a particularly standard practice for suspected meningitis. I started to freak out at that point and eagerly accepted the offer of an ambulance. The crew greeted us and were amazing at keeping us calm and strictly dedicated to getting all the necessary information.

Getting blue lighted to hospital wasn’t what we had been expecting to do… especially as only 3 hours earlier we had all been at home, having a routine check with our health visitor who exclaimed how Teddy ‘is the happiest and healthiest baby I have seen!’.

We arrived to be shown into Resus at the Children’s hospital A&E where staff were waiting for us and ready to take Teddy’s blood and get him checked over. He had worried us a lot in the ambulance because he had gone very floppy and sleepy, not really responding to anything that was going on around him and looking red and feeling warm to touch.

But upon being on the hospital bed he became more awake and even though it was over half an hour of an ordeal whilst they tried to extract blood from his very tiny veins on all of his hands, feet and arms, hearing him cry out strongly and wiggle about in protest was oddly reassuring. I confess I cried… ALOT. Half out of having to watch him in pain and half out of relief that he was conscious enough to protest about it.

So, here we are. Sat waiting for the blood test results to confirm exactly what is wrong, watching Teddy receive intravenous antibiotics and trying to occupy his 14 week old mind within the confines of a 10 by 8 foot hospital room.

The results take 48 hours so once I have them I will post the update below but for now we can just be patient and count our blessings for so many things. The fact Paulibear took Teddy’s jacket off when he did and spotted the rash…. our instinct that something wasn’t right…. the odds of our doctor just passing by as we left the house… the hard working NHS staff who get so much abuse but have never let us down and have made us feel reassured and looked after. I am one humble, dazed and bedraggled Mummy sat here on a hard chair, that’s for sure. In hindsight I really shouldn’t moan about a stupid ole chair but I do always ponder why they don’t find comfier ones…. is it not allowed otherwise people just won’t go home or something? 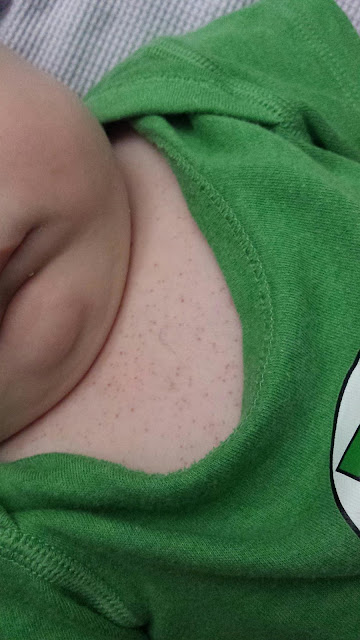 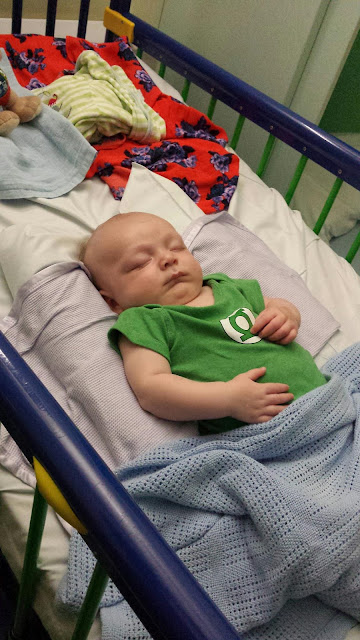