TO SUM UP: STARTING A ROUTINE
Hi Guys!
This week has been all about ‘the routine’. In two separate senses actually. First of all, a routine with regard to (ugh, I can’t believe I am going to type this) Health and Fitness. I am by no means saying that I am striving to achieve twig like proportions (I have never nor will ever be naturally skinny) and I am not turning into a fitness guru either…. I have a real weakness for chocolate and carbs that dictates that I will never, ever be successful at that vocation.
No, I am just at a point where I am ready to start strengthening my post partum body (haha! Predictive text just changed ‘partum to ‘party’… As IF!) and I am making a real effort to eat healthy and move more. Sounds simple but when you have only slept for 2.5 hours, have a baby to care for and baby brain makes you think the fridge is the oven, it’s actually quite challenging.
I’ve found that making a meal plan for the week (as per Paulibear’s suggestion) has helped keep focus on things and prevented me from snacking and cheating. It also means you cut down on the amount of food that gets wasted so I am also helping the planet, win win. Its quite fun actually, writing down your meals and figuring out what you are going to have everyday. As pathetically silly as it sounds, I get excited reading our ‘menu’ on the fridge every day… I look forward to cooking and eating each dish so much…. It’s the little things in life!lol!
As for moving more, if I have energy and time then I go out for a walk with Baby Bear in his push chair. Prams are brilliant tools to use for extra resistance in your exercise routine… mostly because they are bloody heavy and when you have a big baby inside of it, thats even more weight to hoof around. The only problem has been that it is so hot and sunny in England at the moment that I struggle to take him out in the heat for safety reasons. Summer is a wonderful time to be on maternity leave but it can also be as confining as winter weather in a way. So, for the days that I can’t get out for a stroll, I turn to our Wii Fit board for help. I’m sure you’ve all heard of it but just in case you haven’t, it’s a brilliant interactive console that has a board with sensors underneath that you stand on so it can measure your movements whilst you carry out loads of different types of exercise. It leaves no excuse for not exercising at all, I could do it waving pom poms whilst naked in the living room if I wanted to (I wouldn’t…. the cats and Teddy would be mentally scarred for life). The only thing I don;t like on it is the fact they give you a little ‘Mii’ (pronounced ME) character that you design to look like yourself, and once the system weighs you, it adjusts your little Mii to resemble the weight you are at. Let’s just say, my Mii isn’t so little. In fact, it looks more like a Wiii-ble… you see what I did there 😉

Another routine I have worked on establishing this past week has been an evening routine for Baby Bear. Anyone who knows me will agree that I have not really got the best track record with routines. I would get bored of the same thing day in day out and get scared if life could be deemed as ‘predictable’. Nowadays, a routine seems to be something that helps us thrive as a household. I figured that if Baby Bear knew what to expect from his day, especially the evening when it is winding down time in preparation for bed, it would comfort him to be able to predict what would be happening and my theory was right. He finds it a huge comfort to know what happens when and to my own surprise, I have really enjoyed it too. He drinks half a bottle before having half an hour to kick about, followed by a warm bath and fresh pyjamas, finished off with the remaining half of his bottle and a nice cuddle before being swaddled up and placed down for his sleep.

The only tricky thing with having a routine, in any regard, is that you have to be open to the eventuality of the routine being subject to change. Viewing a routine as a sure fire, unbreakable line of defence against calamity and uproar is foolish. Life changes all the time and a routine is just a small way to provide a sense of management. We have had 4 successful, consecutive nights with our new night time routine and I have loved every single one of them and hope that this evening will continue to be the 5th. However, anything can happen and if it does and the routine goes out of the window, the key is to remember that that isn’t a failure and that being frustrated or down hearted about it would be pointless. The best way to deal with such spanners in the works is to adjust accordingly and learn all you can. I believe the term is ‘sink or swim’. I don’t know about you, but sinking is not an option…. even if you doggy paddle, at least you’re still above water, right?

– There is never…. EVER…. going to be a moment in life when there isn’t something to be done. I almost found one this week and then simultaneously, Baby Bear woke up and the washing machine finished its load. I am accepting this fact as best I can!
– Daytime telly continues to suck me in like some visual form of a Henry Hoover. Especially during the mornings, you aren’t sure whether you are watching a show produced by humans or Rise of the Planet of the Apes at times. Then you realise Apes wouldn’t be seen dead being yelled at by Jeremy Kyle.
– Cooking meals from scratch and having leftovers to freeze for a later date leaves you feeling strangely proud and satisfied. The washing up, however, doesn’t.
– Baby Bear is becoming more and more alert during the day. This pleases me greatly! It does make napping harder though…. adjusting to less than 5 hours sleep a night is an ongoing process.
– We have seen smiles from baby bear! Unfortunately they were too quick to capture on camera but he is definitely smiling… hurrah!
– I carried out a couple of hair bookings this week to keep my hand in…. some ridiculous part of me was frightened that I would forget my trade. Silly woman!
– Watching Baby Bear poop is one of the funniest things I have ever witnessed.. see below for exactly why: 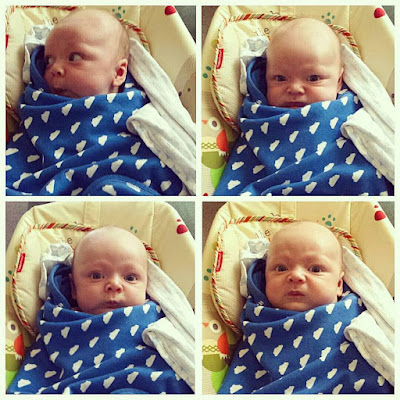