TO SUM UP: BUGGY HUNTING…..

Hi Guys!
As I sit and type this my back is screaming at me and my boobs are hot and tingly… nice visual for you there. Am probably only typing that much graphic information down due to being in some sort of delirium…. blame hormones, a groaning weight of uterus and a busy day working, doing chores and conducting various phone meetings. Not to mention juggling appointments in a diary stuffed full of small business cards, post it notes, scraps of paper with scribbles on and a co op receipt for juice and muffins….
See, am completely spaced out in my head and can’t focus on anything. Oh! The joys of progesterone and god knows how many other natural chemicals that are coursing through my near varicose veins! I swear my boobs look blue from the amount of veins on them! See… TMI again. Still, this is probably the nearest I’ll come to feeling drunk anytime soon so woohooo! Let’s kick back and enjoy the ride shall we?!
Now, whats been happening this week…?
Ah! We went Buggy hunting in Bluewater Shopping Centre, thats right. We decided to head up to John Lewis – (as despite having a plethora of small shops, cafes, bistros, restaurants, clubs, festivals, museums, hairdressers, pubs, massive chain stores and a stupid version of the London Eye, Brighton still does not have a John Lewis!) – as I had heard through the gossip grapevine that John Lewis has a great range of buggies to try out and we wanted to test drive them and so on and so forth.
Well, they certainly had a vast range. Row upon row of them. Big ones, small ones, skinny ones, ones with buggy boards (wish I was small enough to be able to tow a lift on a buggy!) and some with baskets and cup holders, 3 wheelers, ones with tyres, ones with suspensions….. and all with rather scary looking numbers on that I hoped were bar codes but were in actual fact the price tags!
All around us were catalogue type looking couples, lovingly hugging bumps and each other whilst stooping to ‘get a feel’ for the contraption in front of them. Cue Paulibear and myself, both bent double with back ache (me from a baby bear wedged in my pelvis, Paulibear a bout of sciatica brought on from trying out my inflatable pregnancy gym ball the night before… still need to ascertain his reasoning behind that?!) both looking like scared rabbits and both looking around for someone to speak to so that we could at least understand what it was that we wanted to look for.
This lovely blonde lady who had obviously sensed our panic, came over trying to conceal the pound signs in her eyes as we had ‘NOVICE FIRST TIME PARENTS’ flashing above our heads like a beacon and could have easily parted with a lot of money out of our ignorance. She was grinning in the manner that the wolf probably did to Granny in Little Red Riding Hood before eating her. She proceeded to show us the i Candy Range and Bugaboo travel systems, all nearing around £800, before we told her there was no way we could afford such prices. She took us up a couple of rows and showed us a model that was more in our range, and started to demonstrate how to fold it up, spin it round and make it contort from one thing to the next.
Totally transfixing, the whole thing. I never knew there was so much involved in a buggy. I just thought they are glorified trolleys with a seat attached but theres all sorts to consider. Then they charge you for random bits on top… like adaptors (not as in electrical, but frames that make it possible to put a car seat on a buggy frame) and metal frames that you fix to your car to click the car seat onto instead of faffing about with seat belts and what not. They even add a charge on top for having a colour of material?! We came away with a catalogue and a slightly clearer idea about things and are now shopping around for the best deal we can find. I swear leasing my car was easier.
Come to think of it. The buggy hunt is probably another reason for the delirium….
BUMP PIC WEEK 31:
Additional information from this week:
-Fred was snapped snuggling bump the other evening. I really wish I could know whether he truly perceives that there is a baby in there or if he is just opportunistic when it comes to warmth and vibrations. Judge for yourself: 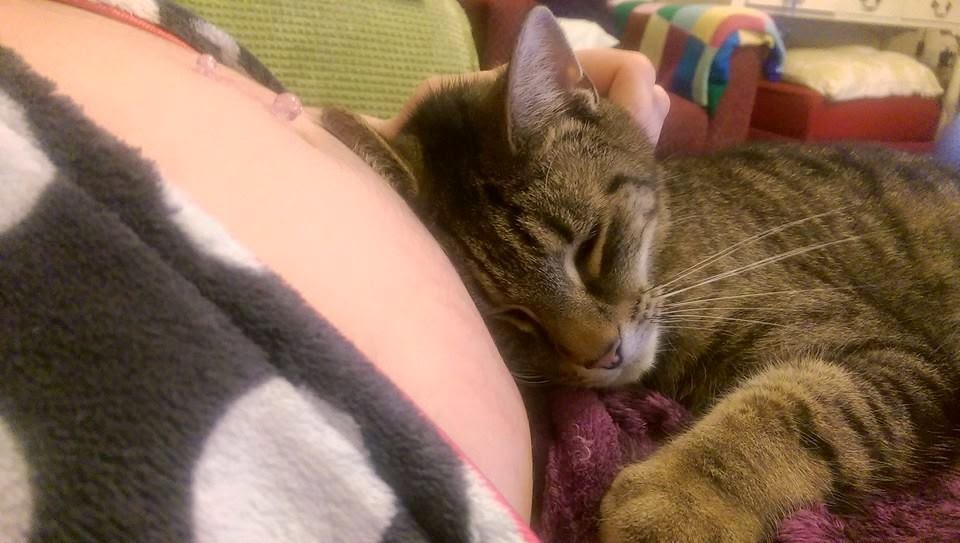 – I have bulk bought maternity pads, nipple pads and disposable knickers to go into my hospital bag. The packaging has cheery flowers and girly patterns on in a bid to cheer you up and make you feel more like a woman and less like a mammal. It really doesn’t work….
– I can no longer bend to pick things up without needing to either let out a groan or figure out if the thing I have dropped or need to get to is really worth the effort. And subsequently, my hormonal mind state is causing a distinct lack of coordination therefore I am dropping things more often than not. Mother Nature is amazing but sometimes she can seriously kiss my pregnant behind!
– Loo roll consumption in our household has reached phenomenal proportions. I am constantly in need of a wee!!! During our buggy hunt I stopped to have 4 wees. We were there a total of 2.5 hrs. What in the hell is that all about?! And it never stops. Night time is the worst time. If I get through a night with just 5 trips to the bathroom I class that as a triumph. I wish I had kept a tally chart for the amount of times I have sat on a loo since my pregnancy began, I bet the number would be hilarious!
– I still chew dish sponges and have also adopted a biro pen lid that I have chewed and chewed until its little pointy bit is now a frayed and flattened bit. It helps me concentrate and just makes me happy.
-We had a 32 week growth scan to check on how Baby Bear’s measurements were fairing. Originally he was way over the percentile, but he seems to have levelled out a little and is in actual fact within the ‘normal’ range now. I put ‘normal’ in brackets because I honestly think that babies’ sizes are so changeable and who can honestly tell what normal truly is. As long as baby and mummy are healthy, the rest is just fluff and nonsense. They should really word it as average, normal is always a dangerous label.
– He is still head down. This makes me both happy….. and completely scared witless!
– I have been leaking my first stage of milk called colostrum… just slap a bell round my neck and call me Daisy.
-I have noticed that without fail, around 20 mins – 1 hr after eating, baby Bear gets the hiccups. Apparently your food intake passes through to the amniotic fluid and baby can taste what you have eaten. Baby Bear obviously approves of my meals as he guzzles up quickly, resulting in a lot of hiccups that resonate through me almost like finger nails on a chalk board. I love his kicks and flips and wriggles, but having a little bean hiccup against your tail bone is a very weird sensation. But hey, I’ll miss them when he is out so he can guzzle away as much as he likes 🙂