TO SUM UP: ONE BIG BALL OF HORMONES!

Hi Guys!
I dunno about you, but last week felt… Weird.
I couldn’t quite place my finger on why or how or in which way it felt weird, it just felt…. Weird! like walking around with my shoes on the wrong feet or something. I’ve since found out that there was in fact a full moon last week, and as much as I am loathed to put all strangeness down to a big silver ball in the sky, it did seem to go hand in glove with some pretty strange mood swings.
Then I remember that hey! I’m pregnant. That’s probably more to do with it. I had heard about the hormonal side of pregnancy, and up until this past week I had managed to evade it pretty nicely. So much so, I was patting myself on the back for keeping my shit together, especially as a pre pregnant me fell apart over the slightest thing every menstrual cycle. One particular time being because I had to do the dishes… Seriously, I was inconsolable.
But… This week, it all seemed to come crashing down on me. I have swung from rage, to sadness, to happiness, to anxiousness to feeling completely numb and lifeless. And that was just in a matter of hours! Poor Paulibear didn’t know whether to hug me, feed me, burp me or shield himself with a chair and whip! Eventually the poor sod hid under the duvet with the cats and avoided eye contact…. Every now and again venturing a ‘You ok…?’ when the steam stopped coming out of my nose and ears.
It is sometimes thought that these mood swings are a choice. That they can be managed and avoided and ‘snapped out of’. As much as I wish it were true, the idea of being able to ignore or skip such things as hormones is completely ridiculous. They can’t be avoided and I was a fool for thinking I was ever going to be able to achieve the impossible. I am also bad at admitting defeat and allowing myself to be helped. So, I resolved to managing my surroundings and readjusting my attitude so that I could get through each ‘swing ride’ instead.
I warned people I felt hormonal, just in case I had a ‘moment’. I stocked up on chocolate and bubble bath. If I wanted to cry I cried. If I needed a hug, I asked for one. If I needed to be quiet, I gave myself that luxury of silence without feeling guilty or anti social. If I felt angry, I turned the air blue and ranted myself hoarse. I punched pillows, I threw balled up socks at the wall and with each sob, hug, sigh, swear word, punch and throw…. A little bit of the pressure in my head got released. I didn’t fight them, or try to explain them, I just sat on the proverbial swing and went with it.
And luckily, I am starting to feel a bit more like myself again. All I have as souvenirs from the past week’s mood swings in a hairy belly (a delightful and hardly mentioned side effect of pregnancy hormones… I look like a baboon when getting into the shower) and two rather sizeable spots on my face that feel like they have their own gravitational pull.
But hey, I’m proud of it all. And in the end, it is all for a very good cause 🙂
BUMP PIC WEEK 22: 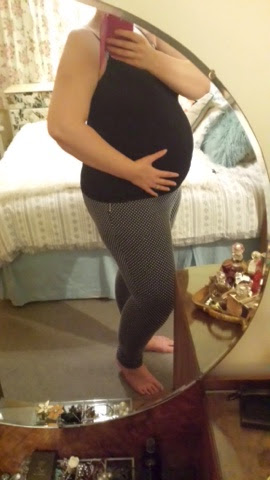