It’s amazing the changes that happen with babies. One minute they are microscopic, just a dream that you are willing to come true. The next, you find yourself watching them in their jumperoo as they give tigger a run for his money!
We’ve tried to get BB to embrace the joys of his jumperoo ever since November last year. He wasn’t too keen at first, slightly overwhelmed by all the gadgets and gizmos he faced alongside the jazzy lights and music that sprung to life at his every move… which were jerky and uncoordinated due to the uncertainty of being suspended in mid air by a seat consisting of cotton material with two leg holes. Slightly unnerving in comparison to the sturdy embrace of an adults arms, you can understand his reservations. 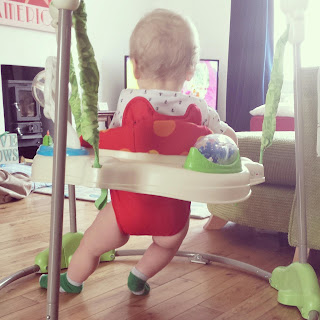 But something has changed in the past week or so and one afternoon this week, he simply got the hang of it and started to jump around. Leap even! He just took off, propelling himself this way and that whilst grinning at us with a mixture of pride and glee! I clapped and cheered him along, my cheering changing to laughter when he paused and nonchalantly reached round to casually spin a plastic bubble with a plastic monkey face and beads rattling around in it. Another endearing and magical moment into the mummy memory archive!
Additional information and findings from this week :
– Babies have constant colds and congestion. We get rid of one and another one immediately takes its place. I can’t remember the last time he wasn’t snuffly or coughing. Which means I can’t remember the last time I wasn’t either!
– Jumperoos look like real fun. I wouldn’t mind having an adult version whilst watching telly of an evening. But instead of various monkey rattles and lights, I’d have a wine dispenser and built in wifi.
– Since moving into a more countryside setting, our cats have taken it upon themselves to cull the field mouse and shrew population in our near vicinity. Rodent corpses have been littering our home like some amateur nod towards taxidermy. PB is loathed to touch them so 9 times out of 10, I become undertaker. It’s a grim task and I’m still trying to perfect picking them up and disposing of them without repeating ‘ew ew ew ew ew, gross gross gross gross GROSS!’. Bloody felines.
– I have been making quite a few observations about cbeebies and am now quite on the way to being a well seasoned viewer. Am planning a post all about my burning questions and issues, ranging from who the hell are Bing Bunny’s parents to why don’t the cast of Balamory ever change their clothes??
– I have coped with interrupted sleep and early mornings for well over a year now (pregnancy gives us a heads up on sleep deprivation!) and only the past week or so have I started to really resent getting up halfway through the night and early in the morning. Maybe it’s being back at work that is making it unbearable, or maybe it’s because we have had a few nights untainted by interruption… but either way, I miss my quality slumber. If you are reading this and have the joy of 8+ hours of blissful shut eye, make the most of every second of it. Do it for me!
– Over a year of sleep deprivation +  work stresses + housework + sick household + dead rodents = a grumpy mummy bear. Hopefully this week will see me being and feeling a little more perky! Just like Topsy and Tim’s mum on cbeebies….
Note: that would be a fate worse than death. The woman is positively smug and makes me feel both sick and inadequate all at the same time. Google it. The woman is a robot I swear!