It is so easy to get caught up within to do lists, chores, errands and routines before you suddenly realise that you and your family are like a robot on auto pilot with relationships that resemble ships passing in the night time.
PB and I are fortunate to have jobs which allow us to share BB’s childcare between us, saving the precious pennies that expensive nurseries and nannies would happily scoop up into their purse. We work as a team and parenting is split down the centre, 50/50. But, it is so easy to forget to make time for one another, of course as a couple, but also time to all be together as a family.
PB pointed this out to a very sensitive me over breakfast on Mother’s Day and at first, I was on the defensive. Guilt plays a huge part in my life since becoming a Mummy, a fact that no doubt resonates with a lot of other Mother’s out there who attempt to strike a work/life balance. PB’s observation struck a nerve and I reacted with a list of all I do to maintain a happy balance to all areas of life along with examples of how hard it is to keep everyone and everything happy. Once I had calmed down and he could actually get a word in, PB pointed out that in all the pictures we have taken of BB, only a handful either show us as a family or were taken at a time that we all 3 of us were together. No way to argue that, I thought. It was all right there, downloaded on icloud and social media. Lovely, beautiful pictures of Teddy but of him with either just one of us or of him on his own because the only other companion with him is taking the photo.
And it made me feel sad.
So this week, we both strived to remember this important need for togetherness and d’you know what? It made all the difference to our stress levels and the atmosphere in the house in general. I’m not talking about grand days out or buying one another precious gifts. We simply made a conscious effort to put aside some time as a family. Half an hour of all of us playing in BB’s nursery before work for example, meant I left the house on a high because I’d said goodbye to happy faces. Or a day at home working together on little house projects only pausing to play with and care for BB has felt as nice as a holiday! I didn’t take any pictures but that was simply because we were too busy enjoying ourselves to bother with a camera. It’s been a marvellous lesson to learn.
I get so caught up in my work, diaries, meetings and even social media to even realise that precious time with my family is slipping away under my nose. All those things are important and make up a part of me, but my little family are my most important part of all. After all, no one ever gets to the end of life and says ‘I wish I had sent more tweets and hit 1000 likes on Instagram’… do they?
Additional information and findings from this week :
– BB is so close to crawling. He sort of semi bum shuffles around which is enough to help him shift position noticeably if we leave him to his own devices for a moment to load the dishwasher or go to the Loo. As much as I wish to celebrate this hurdle almost being mounted, I can’t help but be gripped with terror at the thought of a mobile BB. May contemplate nailing the feet of his sleep suits to the floor….
– Growth spurts are funny old times for babies. They go mental! All time highs followed by all time lows, disturbed sleep and then slumber as deep as the ocean followed by not wanting to eat or drink a morsel before suddenly behaving like a plague of locusts and devouring everything in sight! Only this evening BB consumed 1 jar of pasta bolognese, 4 cubes of cheese, 1 large potatoes waffle, 1 jar of apple and pear puree and 2 pots of petis filous. The only time I can remember eating the adult equivalent was during a pot fuelled mini break to Amsterdam that involved an entire rack of BBQ ribs! The human body is amazing isn’t it?!
– I am starting to try and show BB how discipline works by being firm if he grabs or touches something that he shouldn’t. A firm no and pushing away his hand has so far resulted in him giggling. I tried another approach of putting him on the ground and ignoring him as way of punishment for not listening. He simply sighed and reached out for a toy whilst babbling cheerfully to himself. Must not let confidence be knocked, shall merely keep persevering in hope that 10 months is too soon for a baby to realise the difference between right and wrong.
– the concept of sleeping through a night and catching 10 hours of glorious slumber seems as real as a unicorn farting fresh daisies. If anybody spots said unicorn, please let me know, it shall greatly boost morale!
– BB is beginning to insist upon feeding himself despite not really being able to. I resist giving him the spoon for as long as possible, shovelling in as much food as I can before he flatly refuses to eat thus pitching us both against each other in some sort of food based checkmate. Eventually I relinquish the cutlery and watch as he attempts to eat using the wrong end whilst decorating the room with the contents of his bowl. I’m all for giving them space to learn and allowing them to find their own way with food but my OCD tendencies are put through their paces every meal time. As is the hoover. 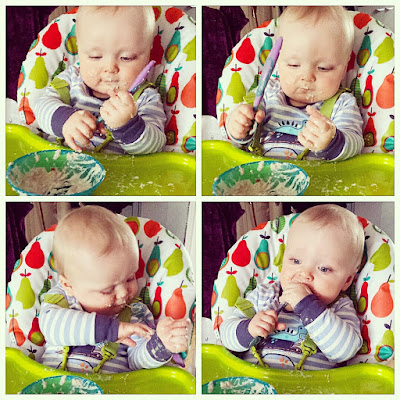 – The Twirlywoos are still of massive importance in our household! We know the theme tune off by heart and I do a rather mean impression of Toodaloo if I do say so myself. As a parent, you will do anything to make your offspring giggle, especially to diffuse grumpy boredom in public places. Which is why I found myself belting out ‘Quacky birds fly over the seaaa-ee…. Bring that boat close home to me-eeee’ in the middle of a rammed Aldi on Saturday morning. No fucks did I give and BB grinned his way through the cashier’s desk. Win win!
<div align=”center”>
<a href=”http://www.twinmummyanddaddy.com/p/binky-linky.html” title=”Binky Linky”><img src=”http://i128.photobucket.com/albums/p184/emily_higgins1/BinkyLinkyBadge_zps6c7e0adf.jpg” alt=”Binky Linky” style=”border:none;” /></a></div>