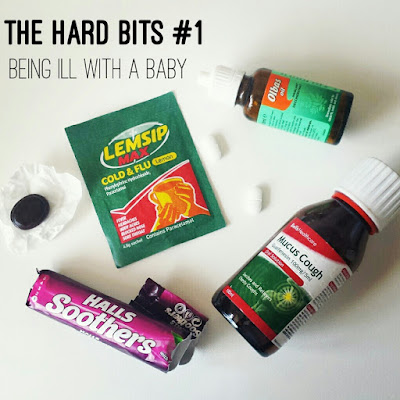 In life, most situations have both positives and negatives. Upsides to downsides. Easy to hard. Bitter to sweet. It’s a necessary balance in life that dictates one cannot exist without the other.
Motherhood is no exception to this vital life balance and this week, a negative has flagged up that I wanted to document because I don’t want this blog to become a misleading, constantly positive representation of Me, Being Mummy that depicts having a child as being complete sunshine, buttercups and rainbows.
I’ve got a stinker of a cold. I have also thrown my back out so have spent the best part of the week with a stuffy nose, achey head and a fear that any sneeze that descends will send by back into spasm.
All of this would have been pretty shit under any circumstances but it has really brought home to me that being ill makes motherhood really hard. Incredibly tough actually. And I’m not even a single parent so my heart and admiration goes out to them for having to soldier on regardless when they’re ill!
Babies are selfish. Not in a nasty sense, bless them, it’s just that they don’t understand other perspectives or patience or the fact that you really, really, REALLY can’t get up off of the sofa to fly them around the room like an airplane. To them it is business as usual, and if your standards of attention, activity or efficiency start to slip, they don’t mind telling you about it.
I normally try and get out everyday to keep Teddy entertained and stimulated. He loves social interaction and watching comings and goings so this week has been piss poor boring for him, staring at four walls with the highlight of the week being watching me blow my nose (his face when I did it was a picture… very ‘what the…?!).
Mummy guilt is a real thing too. It’s cruel. It nags and niggles at you out of nowhere! You’ll be making your breakfast and suddenly you’ll wonder if because you are able to eat, then you should really be able to go out? Or a sigh from your baby will send the little voice in your head into hyper drive with it saying things like ‘He’s bored…. you should do something!’ Or ‘He needs to be entertained, you are failing him!’. You have to rationalise things or else you will convince yourself that you are the worst mother who ever lived who will end up making her offspring into lesser beings of society just because she became a hermit for a week whilst trying to battle a bunch of germs.
The housework piled up. I realised I had to step up when we ran out of cups and the cats were eating out of 5 different bowls… sort of like a feline buffet. The laundry looked as though hiking boots were the only way to conquer it, the fridge represented Antarctica (cold and bare) and the carpet had a different texture and colour about it. You really don’t realise how much you actually manage to do until you can no longer do it.
So, lesson duly learnt and noted. Do not expect motherhood to sympathise with your physical ailments. You’re on your own kid. Or, rather, should that be Mum?